Submissive urination plagues about one in ten dog owners (the dogs don’t know it’s a problem) and is essentially a personality trait.

This is not a housetraining problem and should not be treated like one.

Dogs, like humans, are social animals. Similarities in the human and canine social structure (e.g., living in groups, extended care of the young, communal hunting) have contributed to dogs becoming “man’s best friend.” A complex communication system has evolved among dogs to help establish and maintain stable pack dominance hierarchies, essential for a pack to work together in caring for young, hunting, and defending territory. Dominant animals use vocalizations, gestures, and postures to communicate their status. Subordinate animals use submissive displays to turn off these dominant social threats. When dogs live in “packs” made up of their owners and other humans, they use the same gestures to communicate. Problems arise when humans do not understand these gestures or expect dogs to understand the human society that does not come naturally.  The many differences between canine and human social behavior and communication can lead to miscommunication, misunderstandings, and what humans consider “behavior problems.”  From a dog’s perspective, submissive urination is perfectly normal; but owners have real concerns about this behavior.

Submissive urination is the ultimate gesture of submission. Submissive urinators communicate that they are absolutely no threat to other dogs. In response to the submissive signals, dominant dogs stop their display. 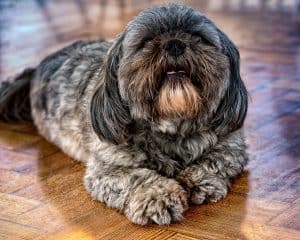 Your Dog May Be Submissively Urinating If:

Common situations where dogs get excited or fearful and urinate are: 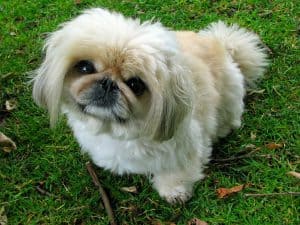 You can see submissive urination in dogs of any age or sex. It is most common in puppies, making perfect sense because they are automatically subordinate to all the adults in the pack. It is also more commonly seen in females and smaller breeds. Many puppies experience submissive urination either due to a lack of neuromuscular control over the bladder or by the previous treatment that frightened or intimidated the puppy.  Submissive urination occurs when dogs are confronted with facial expressions, body postures, or gestures that they perceive as a threat, including humans reaching for them; petting them on the head; leaning over them; talking to them in excited, deep, or harsh tones; making eye contact with them; or punishing them verbally or physically. In canine communication, dominance gestures include staring, standing over, putting a paw across the back of another dog’s neck, and low growls. Dogs interpret human actions as they would another dog’s actions.

While submissively urinating, dogs usually show other submissive signs, including laying their ears back, tucking their tails, cowering, and avoiding eye contact. They may also give a submissive “grin” in which the corners of the lips are pulled back, exposing molars and premolars. This should not be confused with an aggressive lip lift, which shows the incisors and canines. Some dogs roll onto their sides, exposing their bellies while giving these signals and urinating. This is not a request for a belly rub; it is a request to be left alone.

Dogs that submissively urinate expect that their behavior will stop “threats” from humans. Still, well-meaning humans continue leaning over, petting, and trying to comfort these dogs as they would another person. Dogs see this as a continued threat rather than a comforting gesture. Punishing these dogs will only exacerbate the situation. A typical scenario is an owner who is frustrated because his dog urinates on the carpet every time he comes home. Believing that he has “caught the dog in the act,” the owner scolds or otherwise punishes the dog for what he believes is a housebreaking lapse. Thus a dog that is already intimidated and trying to say with its only “words” that it respects the owner’s authority is met with further threats, resulting in more frequent and intense displays of submission.  It’s important to remember that this response is based on the dog’s perception of a threat, not the person’s actual intention. Submissive urination may resolve as your dog gains confidence. You can help to build his confidence by teaching him commands and rewarding him for obeying. You should also gradually expose him to new people and new situations and try to make sure all of his new experiences are positive and happy. 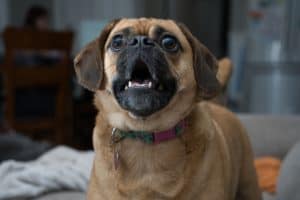 Excitement urination, a variation of the submissive form, usually occurs during greetings. Dogs with this behavior often do not show other signs of submission. Instead, they seem happy and excited to be greeted by humans. These are the puppies that urinate when greeted and then wag their tails and jump on humans, splashing urine all over.   Excitement urination occurs most often during greetings and playtime and is not accompanied by submissive posturing.

During excitement, young dogs often spontaneously urinate. They have no control over this and sometimes do not even realize it has occurred. Other dogs may urinate as a sign of submission in the presence of another animal (or person) that they consider dominant. Submissive urination is sometimes seen in puppies or young dogs that have been abused. However, many puppies that have submissive urination are perfectly normal and from good backgrounds. These urination problems seem to be caused by either a lack of neuromuscular control over the bladder or the previous treatment that frightened or intimidated the puppy.

It would help if you tried to determine what actions or events cause involuntary urination to occur. For some, this will be easy. Excitement or sudden movement toward the puppy may cause her to urinate. For others, it might be something as simple as direct eye contact. Many puppies urinate when you bend over them, so instead, kneel to their level. Whatever the cause, do your best to eliminate these situations or actions. Most puppies will outgrow this behavior by six months to a year of age, especially if we let them mature through this stage of their life in a gentle and calm environment. Be patient. When an accident occurs, do not make a fuss. Could you clean it up and forget it?

Excitement urination usually resolves on its own as a dog matures. However, in some cases, the problem can persist if the dog is frequently punished or if the dog’s behavior is inadvertently reinforced—such as by petting or talking to your dog in a soothing or coddling tone of voice after he urinates when excited.

Your Dog May Have An Excitement Urination Problem If: 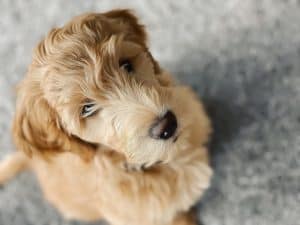 The prognosis for dogs with submissive urination is good: most puppies and young dogs outgrow the problem as they mature and gain confidence in social situations. Treatment relies mainly on owner education and patience. You must learn to accept submissive urination as a normal part of canine social behavior. The battle is half won when you accept that your dog has not lost their housebreaking skills and is not spiteful.

The next step is identifying and avoiding the stimuli that lead to submissive urination. Everyone (e.g., owners. their friends. veterinary caregivers) who interact with dogs that exhibit this behavior should avoid doing anything that causes urination. For example, dogs with submissive urination should not be rushed toward when greeted; instead. They should be allowed to approach on their own. Humans should speak softly, avoid prolonged eye contact, and kneel to avoid towering over these dogs. Ignoring these dogs for the first 5 minutes after arriving home may prevent overexcitement. These dogs should not be reached for, especially over the head; they should be petted under the chin, on the chest. And on the side of the neck.

You may help dogs with submissive or excitement urination by being taught an alternate greeting behavior or associating greetings with a different set of emotional responses. These are forms of counter conditioning. Meet your dog at the door with a treat or toy. The dog will learn to anticipate food or play when you come home and be less likely to urinate. You can shape your dog’s behavior from an excited or submissive greeting to a calm one. When the dog begins looking for the treat, you should wait for them to sit calmly before giving it. Later, it would be best if you gave a treat while their dog is sitting calmly, being petted, and not displaying any submissive gestures. It would help if you did not punish dogs with submissive urination. Some dogs are so sensitive that even upset facial expressions or tense body language from owners are enough to elicit urination. The best way to avoid punishing dogs is to guide them toward appropriate behaviors. For example, instead of yelling “no” when your dog jumps on you, teach them to sit. It would help if you told dogs the right thing to do, something that will result in praise and a reward, rather than being allowed to decide what to do, potentially resulting in scolding and punishment. Reducing the amount of punishment will help build submissive dogs’ confidence and reduce their tendency to show such exaggerated submissive behaviors as urination. Other good confidence builders for dogs include basic training for obedience or dog sports (e.g., agility, fly ball). These activities also help strengthen the owner/dog bond, which may have been damaged by frustration over urination.

What To Do If Your Dog Has A Submissive Urination Problem:

What To Do If Your Dog Has An Excitement Urination Problem: 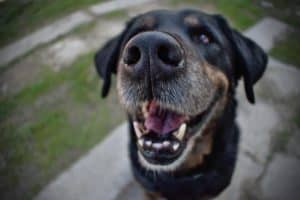 Submissive urination is a commonly encountered, normal canine behavior. It is considered a behavior problem because humans do not want their dogs to urinate in socially unacceptable locations and situations. Submissive urination plagues about one in ten dog owners.  However, it is easily manageable. By learning a little about canine social systems and communication, you can understand your dog’s behavior. After you understand and avoid eliciting the behavior, the submissive urination stops. Confidence-building activities between you and your dog can help end submissive urination and strengthen the owner/dog bond.  How long will it take? Every dog is different, and it’s impossible to say for sure. With most dogs, following our directions will show a noticeable difference within a short time. Solving the problem altogether depends on your hard work, patience, consistency, and willingness to stick with it. If you find that you can’t remedy your dog’s problem by changing your interactive behaviors, there may be other options that you can discuss with your veterinarian. For example, your veterinarian can sometimes give drugs to very excitable, hyper dogs to calm them down.