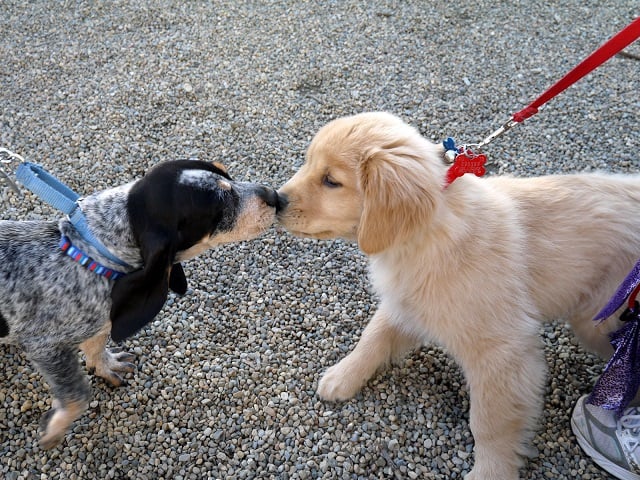 Happy, quiet, demanding, affectionate … puppies are like people; they all have personalities and temperaments!

A dog’s temperament or character is essentially the dog’s general attitude toward people and other animals. It is a result of both inherited and environmental factors. Temperament testing evaluates an individual dog’s temperament through a series of tests that measure traits including stability, confidence, shyness, friendliness, aggressiveness, protectiveness, prey instincts, play drive, self-defense instincts, and ability to distinguish between threatening and nonthreatening situations. It is most commonly conducted for breeders and rescue organizations but can also be helpful for dog owners.

When talking about the character of a puppy, it is essential to keep in mind that our canine friends lack moral values. Some character traits that exist in humans, such as spitefulness, cannot be attributed to dogs.

So what do you need to consider when choosing a new puppy? Puppies develop their personality according to their genes and experiences. Some are easy-going but affectionate. Others are more playful and demanding. To choose your future canine companion, you will have to consider his behavior traits. Here are seven characteristics to look out for in a 7-week old puppy: 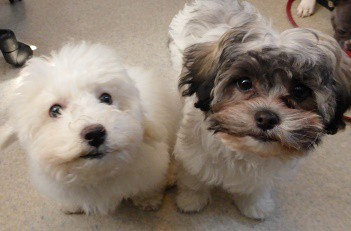 By placing a puppy in an area it has never been and coaxing the pup to you by clapping hands gently and kneeling, and observing how the puppy responds, you can determine the degree of confidence or dependence the puppy has.

A confident pup will come readily, with its tail up, and may jump at you or bite your hands. In comparison, a fearful puppy will not come to you at all.

To determine how attracted the puppy is to you and how independent it is,  stand up and walk away from the pup in a normal manner. You must make sure the puppy sees you walk away.

A dependent pup will quickly follow you with its tail up. It may even get underfoot and bit at your feet.   An independent puppy will not follow and may even move away from you.

To discover how a puppy accepts stress when socially or physically dominated, you will need to crouch down and gently roll the puppy on his back, holding it with one hand for a full 30 seconds.

A dominant puppy will struggle fiercely, flail, and may even bite. On the other hand, a submissive puppy will not struggle and strain to avoid eye contact.

There is a high correlation between the ability to retrieve and the degree of willingness to work with a human. By crouching beside the puppy and attracting its attention with a ball. Then observing how much interest the puppy shows as it watches you toss the ball 1 to 2 meters in front of the pup, you can determine how close of a relationship you will have with that puppy.

This test is of particular interest to dog owners looking for successful obedience or field trial dogs.

Sensitivity to being handled

Some puppies are drama queens and cry and scream at the slightest touch, while others are very stoic. To determine how sensitive a puppy is, you will need to take the puppy’s webbing of one front foot and press it lightly between your finger and thumb. Then more firmly till you get a response, while you count slowly to 10. Stop as soon as the puppy pulls away or shows discomfort.

Some puppies jump and run away when they hear an unexpected sound. Others are curious to investigate where the sound came from. To determine what degree of sensitivity to sound the puppy has, place the pup in the center of an open area. You will need an assistant to make a loud noise a few feet from the puppy, such as a large metal spoon struck sharply on a metal pan twice, and observe how the puppy reacts.

This is also a simple test for deafness.

How curious a puppy is often determines its intelligence and ability to solve problems. Place the puppy in the center of an open area to determine this.   Using a string tied around a large towel, jerk the towel across the floor a few feet away from the puppy and observe the puppy.

A confident, intelligent puppy will watch what you are doing and then attack or bite the towel. On the other hand, a shy or insecure, less smart puppy will run away and hide.

Scoring of the tests 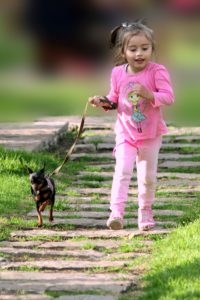 By assigning numbers to the observations and using one of many temperament tests, a potential dog owner can determine an approximation temperament of a puppy and the best way to train it. To explain this better, an interpretation of the Volhard Test is below:

Mostly 1’s:
This dog is extremely dominant and has aggressive tendencies. It is quick to bite and is generally considered not good with children or the elderly. When combined with a 1 or 2 in touch sensitivity, it will be a difficult dog to train. Not a dog for the inexperienced handler; it takes a competent trainer to establish leadership.

Mostly 2’s:
This dog is dominant and can be provoked to bite. Responds well to firm, consistent, fair handling in an adult household and is likely to be a loyal pet once it respects its human leader. Often has bouncy, outgoing temperament: may be too active for elderly, and too dominant for small children.

Mostly 3’s:
This dog accepts human leaders readily. It makes a good obedience prospect and usually has a common-sense approach to life. It is the best prospect for the average owner, adapts well to new situations, and is generally good with children and the elderly, although it may be inclined to be active.

Mostly 4’s:
This dog is submissive and will adapt to most households. It may be slightly less outgoing and active than a dog, mainly scoring 3’s. He gets along well with children in general and trains well.

Mostly 5’s:
This dog is extremely submissive and needs special handling to build confidence and bring him out of his shell. It does not adapt well to change and confusion and requires a stable, structured environment. Usually safe around children and bites only when severely stressed. Not a good choice for a beginner since it frightens easily and takes a long time to get used to new experiences.

Mostly 6’s:
This dog is independent. He is not affectionate and may dislike petting and cuddling. It isn’t easy to establish a relationship with him for working or as a pet. Not recommended for children who may force attention on him; he is not a beginner’s dog.

No clear patterns (several 1’s, 2’s, and 5’s):
This dog may not be feeling well. Perhaps it just ate or was recently wormed. Wait two days and re-test. If the test still shows wide variations (lots of 1’s and 5’s), it is probably unpredictable and unlikely to be a good pet or obedience dog.

3 in Social Attraction and Social Dominance:
The socially attracted dog is more easily taught to come and is more cuddly and friendly. Despite other scores, its interest in people can be a valuable tool in training.

1 in restraint and 1 in Touch Sensitivity:
The dominant, aggressive dog, insensitive to touch, will be a handful to train and extremely difficult for anyone other than an exceptionally competent handler.

5 in stability:
This is likely to be a “spooky” dog which is never desirable. It requires a great deal of extra work to get a spooky dog adapted to new situations, and they generally cannot be depended upon in a crisis.

5 in Touch and Sound Sensitivity:
It may also be very “spooky” and needs delicate handling to prevent the dog from becoming frightened.

You should only make your final selection of a puppy after consultation with breeders or shelter staff and your careful assessment of the puppy’s suitability for your lifestyle. Dogs in any given breed have individual personalities and temperaments.   If you are looking for puppies for sale from reputable breeders or adopting a dog from a rescue, then make sure you understand as much about the dog breeds you are interested in as you can. Every puppy breed is different. You may be captivated by a puppy in a pet shop. Although it has all the proper papers and its parents are purebred, you will never be able to evaluate the puppy’s parents, nor do you know anything about the puppy’s upbringing. Good breeders should help you match an individual puppy to your tastes in temperament.

Laura Pakis, owner and founder of Acme Canine, has been a professional dog trainer for numerous years and a boarding/daycare facility owner for 13 years. A member of the Dog Writer’s Association, Blog Paws, Women in the Pet Industry, and the International Association of Canine Professionals, Laura share her canine knowledge through various social media.

Laura feels responsible ownership is an integral part of having a dog and guides her blog, Spike’s Dog Blog by Acme Canine, toward providing dog owners with training, knowledge, care, and understanding of dogs.