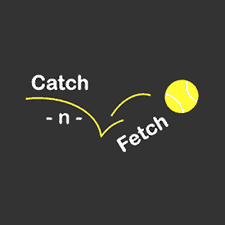 “Catch-n-Fetch is a day time care facility specifically designed for your dog to run and play in while you are away for the day. Our goal is to provide your pet with lots of attention and exercise. We have over 10,000 square feet of supervised indoor/outdoor playgrounds for your pooch!

Daycare is available Monday – Friday: 7:00 a.m. – 6:30 p.m. and Saturday 9 a.m. – 3 p.m. Daycare is closed on all major holidays. Dogs not picked up by closing time will be considered overnight guests and charged the standard boarding rate of $22 for that evening.

Your evening can be spent just enjoying your pets company or tending to life’s other issues. Our staff supervises play, monitors the dogs for exhaustion or stress, and encourages all the dogs, even the shy and timid, to run and play and burn up all that pinned up energy. We play catch and tug of war, give belly rubs and brush their coats. Positive reinforcement is used especially when practicing those basic obedience commands. Feedings and medication are provided if requested by the owner. The dogs are not crated during the day, however, we have time-out kennels for those who need to regroup.”


Penny and Autumn had the opportunity to spend a day at Catch N Fetch’s daycare, located on East Broad Street in Gahanna. Here’s our review of this business. 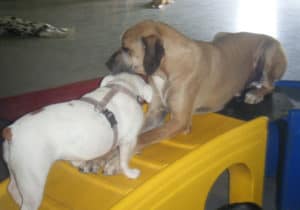 The tour of the facility

We stopped by on a weekday to see about scheduling Penny and Autumn for daycare.  No one was at the front desk but as clients brought their dogs in, the staff came to the lobby and we were assisted.  The staff was knowledgeable and very friendly.  They informed us that the dogs needed to be up to date on vaccines and also the influenza vaccine and booster.  Before attending daycare, we would need to provide the dogs’ veterinary records as proof.  We were also given an application and owner’s agreement to complete and return at the dogs’ temperament test appointment.

Daycare includes 3 sectioned play areas, each with a staff member

The staff then gave a tour of the daycare area which includes 3 sectioned play areas each with a staff member.  The largest area was designated for active dogs.  There was an area for older dogs and dogs that don’t like a high stimulation and an area for smaller dogs.  Each area had objects to climb on and a large garage door which opened to the outdoors.  During the summer, we were told, these doors stay open so the dogs can go in and out for play and bathroom breaks.  In the winter the doors are open every 1-2 hours so the dogs can eliminate outside.

What I like about this arrangement is that should there be a problem, staff can immediately assist each other since they are all in a single room.

Catch N Fetch takes in about 20 dogs per play area with a few more in the larger play area.  Dogs are active throughout their stay but monitored for stress and put in a kennel should they need downtime.  Dogs are encouraged to eliminate outdoors which helps keep housetraining at home easily maintained.

I didn’t notice water bowls in the play areas.  Something to ask about. Water can transmit diseases between dogs unless it is refreshed often.  Also many dogs play in the water which causes extra clean up for staff and a slippery floor for the other dogs. Catch N Fetch may not have water always available. 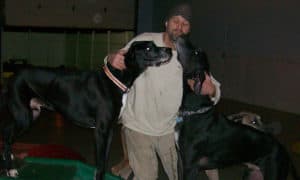 Before Penny and Autumn could attend daycare, an appointment for testing their temperament and behavior was required.  These are scheduled in the evenings and involves the dogs meeting the staff and observing their reactions to being touched.  If they pass the initial greeting, they are brought into one of the play areas with a staff member and daycare dogs, who the staff knew to be well-adjusted and friendly, are brought into the play area one at a time.  We, the owners,  watch our dog’s interactions on a television in the lobby.

Being a dog trainer myself I was able to catch what the staff was looking for;  Penny and Autumn’s reaction to the staff and being touched,  their reaction to other dogs without their owners in the room, first greeting, how they reacted when a dog approached, confidence level…a lot of behavioral body language which lets one know if the dog will be reactive in a play setting or not. 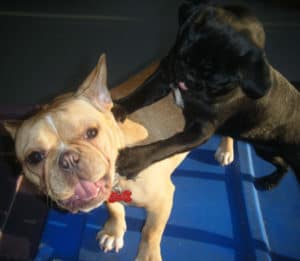 We called later in the week to schedule Penny and Autumn’s first daycare visit.  Catch N Fetch only allows one new dog each day to daycare (or two dogs if from the same family).  I can see their reasoning for this: the staff still doesn’t know the dog’s behavior.  By monitoring Penny and Autumn throughout the first day they can see how stress and tiredness affects their interaction with other dogs–A good thing for all daycares to do.

When we can at 5pm to pick up the girls we could hear Penny howling with excitement.  Both dogs were brought out to us pulling on the leash.  We were told they both did well and that Penny was very vocal throughout the day. Phil took them outside while I paid the daycare fee.

Once home both dogs eliminated immediately after coming out of the car and drank a considerable amount of water when they came in the house.  They were exhausted and slept the remainder of the evening. We didn’t receive a call or email from Catch N Fetch during the day to let us know how the dogs did on their first day and we haven’t heard from them since the dogs visit.

My opinion of Catch N Fetch

Catch N Fetch is definitely one of the better daycares in the Columbus area.  They keep it clean (no doggie odors in the lobby or in the play areas) and provide good supervision (both on video and with the staff interaction).  Although inconvenient to come one day for testing and another day for daycare, this is something that is very beneficial to all the dogs attending daycare since it helps to weed out problem dogs that really shouldn’t be in daycare.

With the number of dogs at their facility at one time, by separating them according to physical needs (size and activity level) helps reduce problems from occurring.  Also, it allows staff better interaction with the dogs in their care.

Hours of service may be inconvenience to some dog owners

From a previous boarding/daycare owner’s point of view, their hours make sense.  Boarding dogs are in play areas before the daycare dogs arrive at 7:00am which gives them an hour or so of play, and then back out again after the daycare dogs are picked up at 6:30pm.  This allows staff time to clean and take care of tasks before they head home (around 9:00pm)

From a dog owner’s point of view, the evening pick up time might be a bit early for some dog owners with later work schedules.

I would also have liked them to enforce basic commands such as not barking and walking politely but that may just be the trainer coming out in me.

Although not necessary, it would have been nice touch to receive an update on the first day of daycare or a report card.

Catch N Fetch was recently voted by the Columbus Dispatch as one of the 2017 top picks for Doggie Daycare.  The other two in the running were Pet Palace and All Tails R Waggin . Be sure to read our review on each of these daycares and the differences between them.