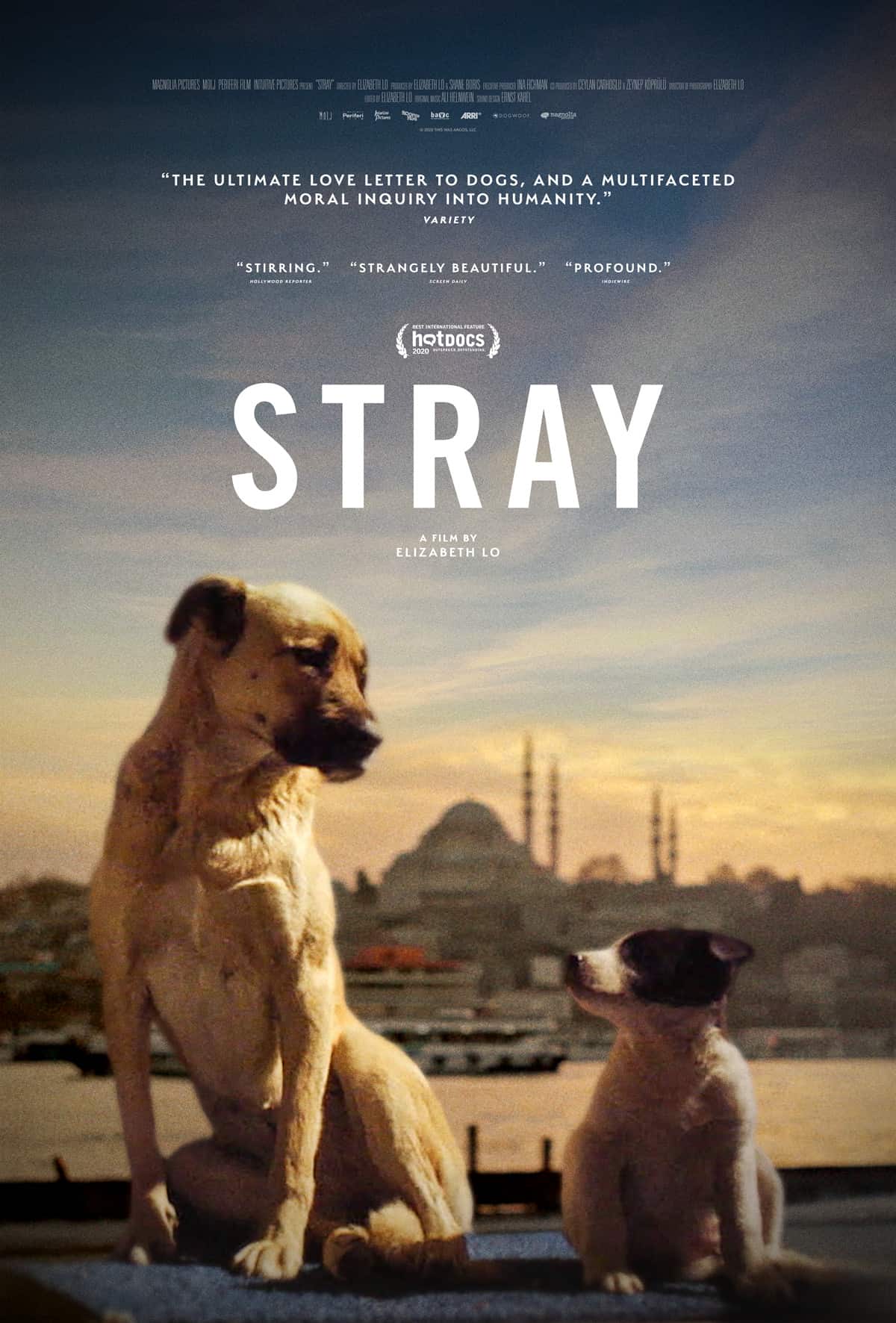 In STRAY, a trio of canine outcasts roam the streets of Istanbul. Through their eyes and ears, we are shown an intimate portrait of the life of a city and its people.

“Human beings live artificially and hypocritically and would do well to study
the dog.”
– DIOGENES OF SINOPE, 360 B.C.

Through the eyes of three stray dogs wandering the streets of Istanbul, STRAY explores what it means to live as a being without status or security. As they search for food and shelter, Zeytin, Nazar, and Kartal embark on inconspicuous journeys through Turkish society that allows us an unvarnished portrait of human life—and their own canine culture.

Zeytin, fiercely independent, embarks on solitary adventures through the city at night; Nazar, nurturing and protective, easily befriends the humans around her, while Kartal, a shy puppy living on the outskirts of a construction site, finds refuge with the security guards who care for her.

The disparate lives ofZeytin, Nazar, and Kartal intersect when they form intimate bonds with a group of young Syrians who share the streets with them.

Whether they lead us into bustling streets or decrepit ruins, the gaze of these strays acts as windows into the overlooked corners of society: women in loveless marriages, protesters without arms, refugees without sanctuary.

On March 5th, Elizabeth Lo’s heartwarming and compassionate documentary STRAY will release. This film is a critical observation of human civilization through the unfamiliar gaze of dogs and a sensory voyage into new ways of seeing.  It is at this intersection that STRAY seeks to shed light on Turkey’s societal convulsions through the observations of Zeytin and her companions —both human and nonhuman.

Up for numerous year-end awards, the filmmakers are looking to create awareness with like-minded groups that will appreciate the film’s respectful way it profiles these animals.

about the Director, Producer, Cinematographer, Editor

Elizabeth Lo is an award-winning filmmaker. Her work has been broadcast and showcased internationally, including at the Sundance Film Festival, Tribeca Film Festival, Hot Docs, True/False, BAMCinemafest, New York Times Op-Docs, and PBS’ POV. Elizabeth was named one of the “25 New Faces of Independent Film” by Filmmaker Magazine in 2015 and was featured in the 2015 Saatchi & Saatchi New Directors’ Showcase at Cannes Lion. She was selected for the New York Film Festival Artist Academy in 2018 and the Locarno Film Festival Filmmakers Academy in 2019. Elizabeth’s work has played at over 100 film festivals and has won numerous awards. Her short films include Hotel 22 (2015), Bisonhead (2016), Mother’s Day (2017), The Disclosure President (2016), Notes from Buena Vista (2016), Treasure Island (2014), and Last Stop in Santa Rosa (2013). In 2017, her collected shorts were released by Video Project as a DVD, The Short Films of Elizabeth Lo, for distribution to educational institutions and libraries around the world. Elizabeth was born and raised in Hong and holds a B.F.A. from NYU Tisch School of the Arts and an M.F.A. from Stanford University. STRAY is her feature film debut.