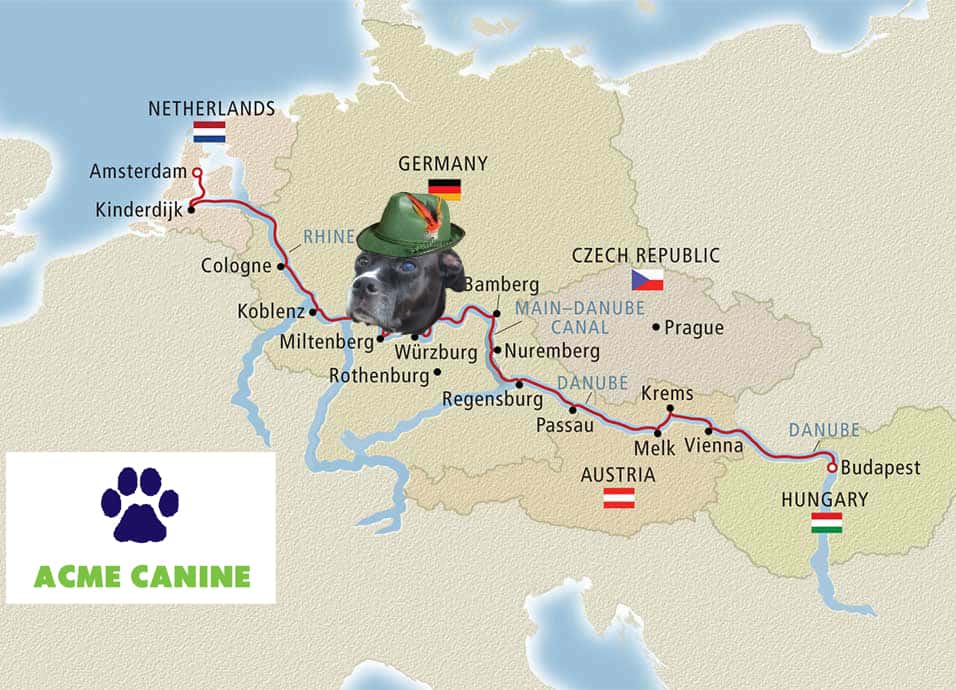 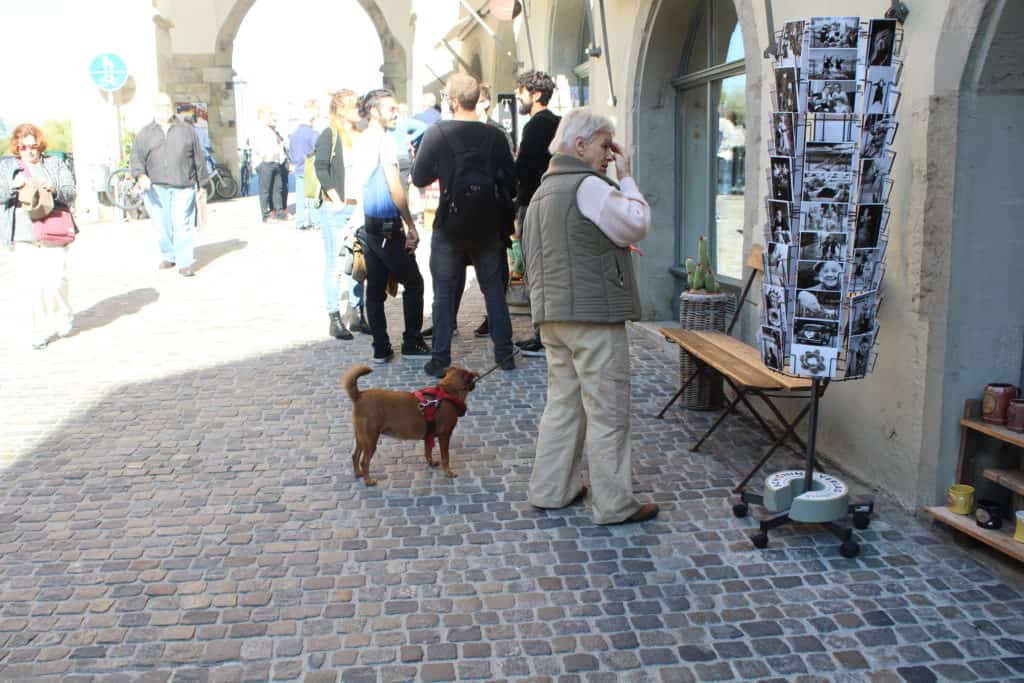 Arriving in Germany through Passau we immediately noticed the amazing number of dogs walking with their owners.  Some stores had no problem with a dog being inside, others put up signs to indicate the dog should stay outside. Where a dog wasn’t allowed the owner would tie up the dog to a hook outside the building. 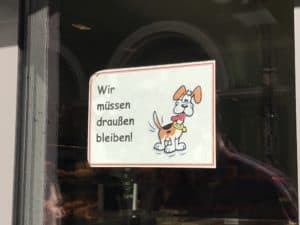 Being in the city most of the dogs were small to medium size and all wearing a variety of collars and harnesses.  We did meet an Old English sheepdog/Poodle mix of about 100 lbs. He was very well-mannered but only 1 year old.  The owners were teaching the dog to go under the table which responded quickly to command.  As we passed, the dog’s excitement made it stand up causing the table to tip.   Although humorous the owners enforced the command and the dog laid down again. 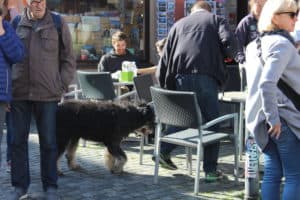 We saw mostly Labradors, Pugs, and French Bulldogs as well as many mixed breeds.  From what I understand in 2002 the state of Bavaria enacted a law against dangerous dogs and lists two classes of dangerous dogs. Proving pedigree is the owner’s responsibility.

Class 1 dogs are presumed by law to always be dangerous, based on their breed (characterized by an enormous tendency to bite at a low level of provocation).

The following breeds are considered Class 1 and are not allowed to be imported into Bavaria.
AMERICAN STAFFORDSHIRE TERRIER
BANDOG
PIT-BULL TERRIER
STAFFORDSHIRE BULL TERRIER
TOSA-INU
(Or any dog mixed with any breed listed above)

Class 2 dogs are presumed to be dangerous and aggressive unless proof (temperament test) is provided that the individual dog does not possess any increased aggressiveness or danger for humans and
animals. The following breeds and their crosses belong to Class 2. They can be brought to Bavaria but certain steps are necessary for registration with local German authorities.

Class 2 Dogs must be temperament tested

Class 2 Dogs must be temperament tested at the owner’s expense by authorized/licensed personnel regarding the dog’s potential increased aggressiveness. There is a charge for this testing (approx. 200 Euro per dog). 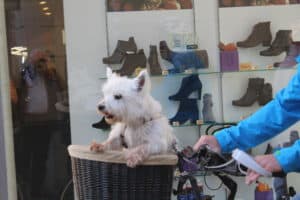 In addition, the dog must be at least 9 months old to be temperament tested and the licensed person will decide if the dog is mature enough to be tested.

Here is the cool part about this. The test will cover, among other things, the following subjects:
-How does the dog react to strangers: approach and touch?
-How does the dog respond to other animals, running kids, joggers, or when playing ball?
-Is the dog disobedient or dominant to the owner?
-Is the owner in control of the dog?
-Will an untrained Rottweiler protect its owner?
-How does the dog owner treat his dog?
-Does the owner recognize mistakes in the dog’s training?
-Has the dog been trained at all? 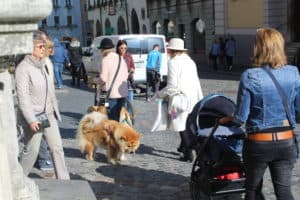 When this happens, the dog has to be released to someone who is ‘entitled’ to have such a dog or send the dog to friends or family out of Germany.  Otherwise, the dog will be put to sleep.

This may seem a little harsh in US standards but there is something to say about determining if someone has the ability to handle higher caliber dogs. And this encourages Bavarian dog owners to spend the time training their dog.

Last Updated on October 9, 2020 by acmecanine