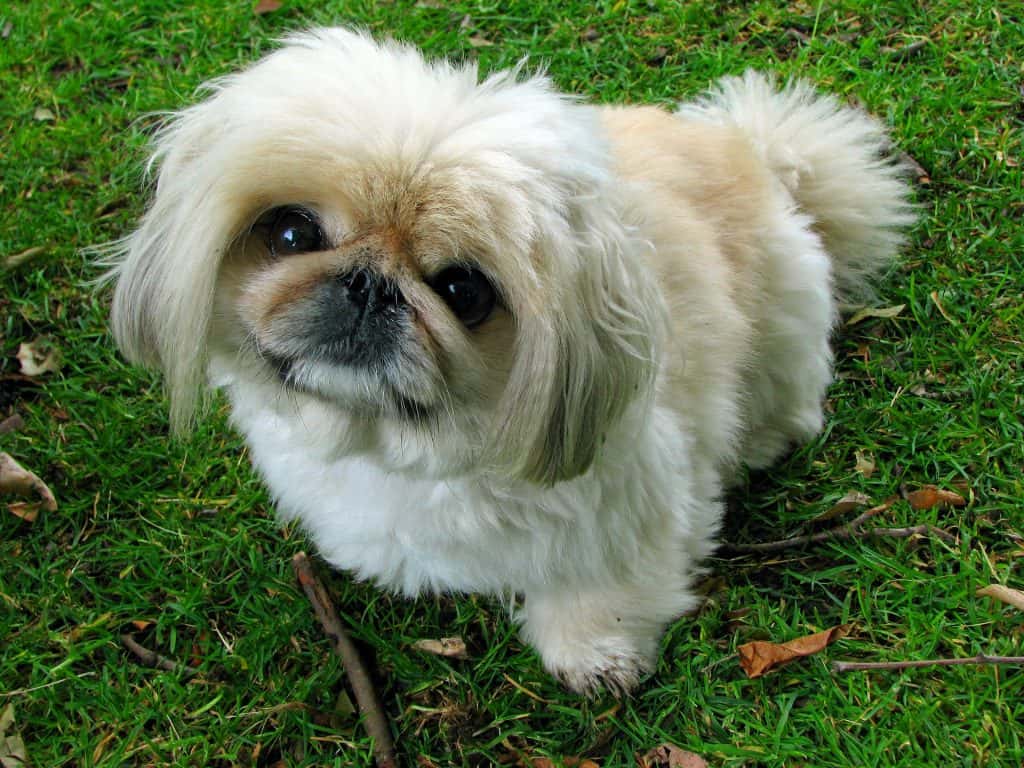 Litter box training is a two-step process.  Your dog must be comfortable using a litterbox and understand the elimination command.  Also, there are a couple of ways to teach litter box elimination.

To get started, you will need to establish a bathroom area.  You will need a litter box, dog litter, and potty pads or newspapers.

Placement of the box is important.  It must be next to the potty pad/newspapers, and the open side should minimize “fallout.”  Dogs have a digging instinct, so it is important to have the litter box in a corner against a wall.  This minimizes cleanup in the event of a digging episode!  It looks like a tight spot, but honestly, small dogs don’t have any problem getting in and out.

At its most basic, the box should be large enough for your dog to turn around comfortably. The sides of the box should be low enough for him to climb in by himself; however, if your dog is of the male persuasion, make sure the sides are high enough to catch the results of enthusiastic leg-lifting. Also, some dogs are super clean and want a separate box for #2.  If your dog is like this, place the two litter boxes together and remove the poop after each elimination.

While you may be tempted to place the box in a far corner of the basement or an infrequently used guest room, that’s a recipe for disaster. Your dog needs convenient access to the litter box, and you need a visual reminder to clean it (which you should do each time your dog uses it, if possible). Determine the ideal spot using cat litter box placement principles: a location easily accessed but with a sense of privacy. 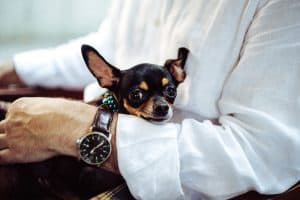 During the next several weeks, the dog should either be with you or in his crate. If you are unable to observe the dog, put him in his crate.   If you notice actions such as circling or sniffing (usually indicating the dog has “to go”), then encourage the dog on a leash to go to the potty area to do his business on the potty pad.  Use the keyword “GO POTTY” for this action.  Repeat this word often at the spot where the dog should do his business.

In about one month from now, the dog should be solidly paper-trained.  Then, you can make a gentle progression from paper to litter box.

Progressing from Paper to the Litter box

You’ll need to get the dog accustomed to the litter box.  It should be in his area from the beginning, with a tiny bit of litter in the bottom and some newspaper inside it. It would help if you also put a newspaper right next to the litter box of paper training.  Some folks have reported better results by adding one of the commercial “potty aid” liquids in the litter box during the early training stages.  I’ll leave that up to you.

At the outset, you’ll need to get the dog used to simply getting in and out of the box.  Make it into a fun experience for the dog.  Lift and place the dog in the litter box and use the key phrase like “use the box” or “go potty.”  Praise him and be happy.  He’ll likely get out of the box.  Walk over, repeat the keyword/phrase, and put the dog in the box.  Repeat the “praise and happy” routine and even give a little treat.

If the dog stresses or tires of the game, stop.  Repeat it another time or day.  Soon, you’ll be able to repeat the keyword while gently guiding the dog in the box from outside the box.

After a few sessions, you should have the dog go in the box on his own when the keyword is used. 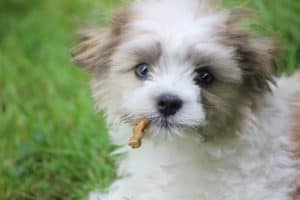 There are also additional alternatives for litter boxes.   You can use large plastic bins or the top of travel crates if you need a larger space.

Some companies build and sell self-contained litterboxes to which hoses can be hooked up to flush and exit wastewater.  Generally, these sophisticated units run around $600-$700.

You’ll need a large plastic tub to serve as your dog’s litter box. Many models on the market have different features, including modesty-serving covers, self-cleaning functions, and layered boxes that have a grate or grass on top and allow waste to collect in a lower pan. Expect to pay anywhere from $50 to $500 for the initial setup and the ongoing litter replacement cost. Dog litter itself is similar to the kitty variety, and there are many kinds, from paper pellets with activated charcoal odor control to simple clay litters. For DIY scent control, sprinkle baking soda in the bottom of the box each time you empty it. 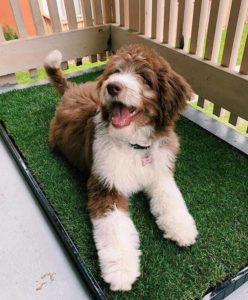 Crate style training is, in my opinion, the quickest and most effective means of litter box training. Traditional crate training involves putting a dog in a bed/kennel except when it is active with you or outside using the bathroom.  The concept is simple.  Every creature has a natural aversion to soiling where it eats or sleeps.  The crate style method for litter box training is similar, except that eventually, the dog will have greater freedom, even while you’re away from the house.

NOTE: Before starting crate style training, you should already have the dog comfortable with the litter box and able to hop in and out of it without fear (see earlier section).  The dog should also be accustomed to or know that he is expected to use “his area” for the bathroom.

Instead of just a travel kennel or cage, you make an area with a bed, food, water, and a litter box.  The area must be large enough for the dog to get up, turn around, and lay down comfortably — but there must be no open space for the dog to use the bathroom except the litter box.  The cage material should be sturdy and something the dog cannot jump over or hurt himself trying to escape from.  A child safety gate and/or latex lattice works great.  Use bungy type strapping hooks to lash easily and hook your cage.

It’s also possible to use playpens or commercial cages.  If using a pen or cage, be sure to fill any open space with plastic buckets or some other safe material that will prevent the dog from using open space in a pen or cage as a bathroom area.  Once you have constructed your “crate area,” place the dog in this “crate” at typical bathroom times (after eating, after sleeping, etc.)  The dog should stay in this crate area until he uses the bathroom.  Try to be nearby so you can catch the dog in the act and praise him right after he uses the box. Remember to use your keyword or phrase!

The crate should also be in the potty area.  When you are with the dog in the house, this crate should be open and part of his “direct path” to his bathroom area.

The crate training routine should continue until you see the dog use the litter box on his own.  It would be best if you occasionally stayed in the room with the dog at times you know he needs to go.  With the crate area open, encourage him to use the litter box, repeating with the keyword frequently, and praise him whenever he uses the box.  Soon, you’ll walk with the dog into the room, use the keyword, and the dog will go in the litter box to do his business.  Eventually, he will go there on his own.

I’ve never seen the crate style method not work.  Properly laid out, it simply doesn’t give the dog any other choice.  Check to make sure you have the area as small as possible, limiting his choices. 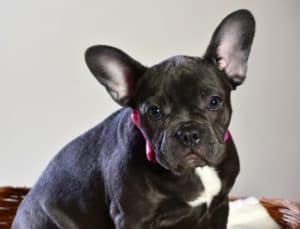 The dog is in a crate unless you are supervising it.  No exceptions.

It usually takes from 10 – 14 days for a dog to change its pattern.

These are some common mistakes to avoid:

Be consistent.  Pick the dog’s area or spot and stick with it.  Use the same keyword or phrase.  Keep a routine as much as possible.  Any change must be very gradual.

Watch the dog constantly during the first two weeks.  If the dog is not beside you with you watching him, he should be in his crate. There must be a direct path between you and the dog’s bathroom area at all times.   A single “uncaught” act of peeing or pooping in the wrong place will set you back nearly to the beginning.

Try not to show emotion if the dog has an accident. Rather, have the “house” give the correction.

Never hit, beat or “grind” the dog’s nose into the “accident.”  It will be a mistake your dog will never forget, and you will always regret it.

Keep the potty area clean.  Regularly replace pads and dispose of all the waste.  At least once a month, wash the area with soap and water.

Always deal with relapses or accidents.  Once the dog begins to use the potty pads, you’ll provide more freedom.  Then, he will have an accident — or decide to start using a different spot.  NEVER let this go without dealing with the situation.  Immediately start the routine again, including crating, if necessary.  If you don’t deal with a relapse, the dog will revert to going anywhere and everywhere in the house. 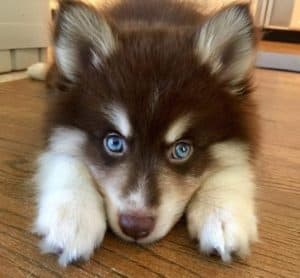 Remember, either process takes several weeks before the dog will reliably go to the litter box by himself and several months of checking and monitoring before the dog will be fully “on his own.”  With every dog, there’s frustration, and you’ll say, “He just doesn’t get it.  He will never do this”.  Then, suddenly, he’ll catch on!

While it takes time and patience to teach your dog to go potty indoors, you can do it. And the rewards of successful training can be great.