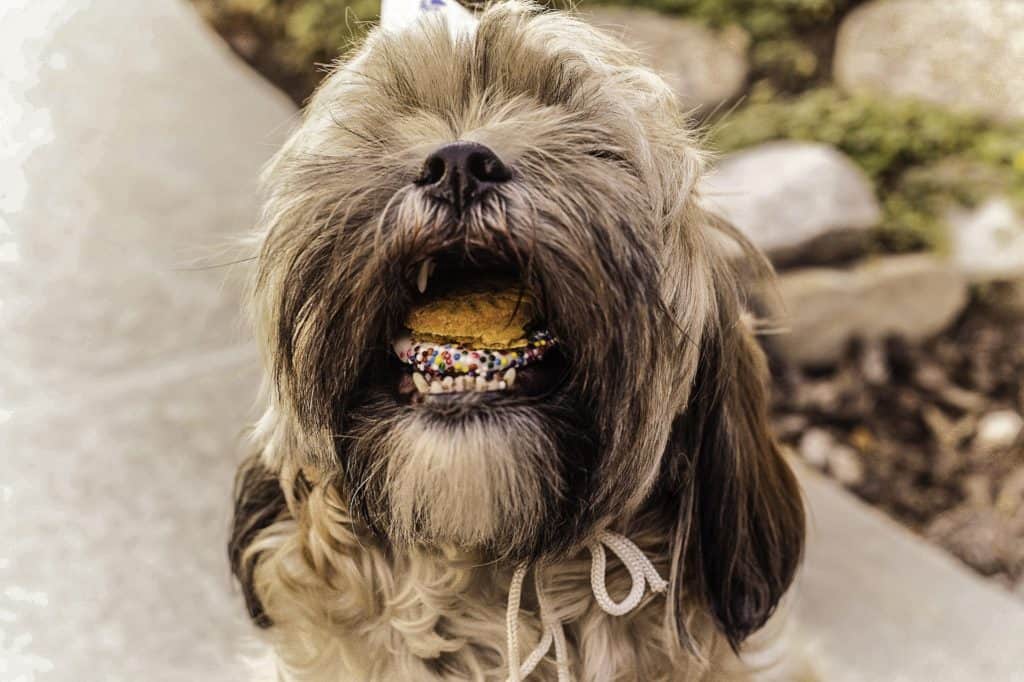 Counter surfing can be one of the most difficult things to train a dog not to do.  It doesn’t matter if you yell at the dog, physically punish it, give it a time out or anything else—the dog still got the hamburgers you were planning to cookout with and they were delicious.

Dogs are natural food scavengers.  They will eat items we as humans know are inappropriate; such as foil, plastic wrappers and more.  Counter surfing can be one of the most difficult things to train a dog not to do.  Almost every time a dog jumps, it is reinforced by what it finds up there.  It doesn’t matter if you yell at the dog, physically punish it, give it a time out or anything else—the dog still got the food and it was good while it lasted.

Management is the key to stopping counter surfing.  If you don’t have anything on the counter for the dog to get, then there is no reason to jump.  In most cases, keeping temptations out of reach and zoning appropriate areas for the dog to occupy is what is really necessary and successful.  This type of management is very difficult for most people to deal with, so there are some things that you can do to stop counter surfing.

Teach your dog the commands DOWN or PLACE MAT 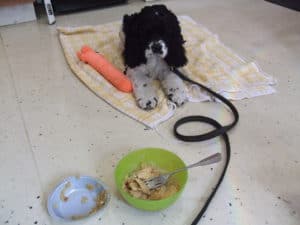 Teach your dog to the down or place mat command to keep them from being under foot.  Once your dog is able to do the command for 5 minutes, begin his training during food preparation times.  This will extend the amount of time it takes to prepare your meals but is well worth it.  Your dog will learn to remain on a mat, or to be in the same spot.  Your timing will make a big difference in how quickly progress is made.  Catching him after he has left his place or gotten up from the down and walked several steps is far from catching the first muscle contraction or intention to break the command.  This is why, for a few days you will need to extend the time it takes to prepare your meals.  Don’t get discouraged.  This will be very time consuming in the early stages of training.  A large amount of time will be needed to keep a good eye on the dog during the first few training sessions.

Once your dog can hold the command 5 minutes, gradually increase the time by 5 minutes every 3 days until the dog can hold the command for the entire time you prepare a meal.  To achieve this may take several weeks depending on how many times you practice.  If he gets up at anytime during training, you give him a correction and either put him back into a down or take him back to his “place”.  Your dog will learn that if he breaks the command, he will be put back anyway, but if he holds the command on his own, he has a good chance for a reward. 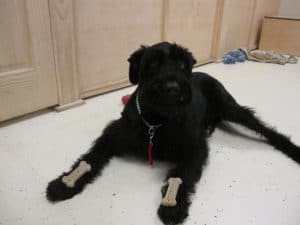 Teach your dog the command LEAVE IT

Teach your dog to “leave it” by placing a small piece of food (teaser) on the floor with your hand covering it.  Verbally cue “leave it” at any attempts to get the teaser.  Practice this until your dog is leaving the teaser immediately after you give the cue “leave it”.  Praise for calm behavior and ignoring the food.  Then place the teaser on the floor uncovered – but be poised to cover it if your dog should decide to grab it. Praise for calm behavior and ignoring the teaser. Practice this until your dog is great at it.  Practice placing the teaser on the coffee table, the counter, etc.  Methodically add distance between yourself and the teaser.  Do short trials with you near by practicing with different teaser food items on the counter and in different areas of the counter. Make sure you practice for turning your back and if you want to you can work on having him leave the food while you go out of sight. Begin by making it very quick and returning to praise him.

You can restrict the dog’s access to the kitchen.  This can be done with baby gates, convenient doors or by simply never letting the dog into the kitchen.  In addition to preventing the dog from helping himself to food (and some dogs can be very covert about this), excluding the dog from the kitchen while you are preparing food also avoids presenting you with the temptation to give him scraps and so encourage him to beg or steal (and also inadvertently causing the dog to become overweight of eat things that would disagree with him) , and it puts the dog outside the risk zone for hazards such as accidental spilling of boiling water or deep-frying oil . Additionally you may want to exclude the dog from the room where you are eating during a meal, especially if you have guests who might be pushovers for doggie begging. If you often eat off of a TV table or a coffee table while watching TV and don’t want to wonder if your dog is helping himself to your dinner if you have to leave the room for a moment, then exclusion can be a good strategy. The obvious methods of exclusion are to crate the dog (possibly with his own dinner served inside the crate) or to have a stretch gate barrier to keep all dogs out of the room temporarily.

Teach your dog not to countersurf before it becomes a problem

Even if your dog has never had a counter surfing problem you will want to set the dog up.  By doing so your dog will learn that it is ALWAYS dangerous to try getting up on the counter.  The main objective is to make counter surfing so risky and unattractive that the dog gives up. 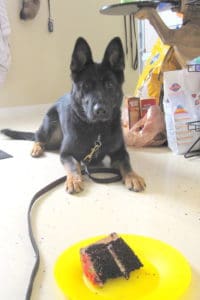 One method involves booby traps.  BOOBY TRAPS are when you leave a temptation available but gimmicked in a way that when the dog tries to touch it, something sufficiently startling or averse occurs. The most usual booby traps would be mouse-traps (including for easily discouraged dogs, the variant called “Snappy Trainer” which has a plastic flap attached that causes increased startle effect but prevents any stinging pinch if a paw or nose gets snapped).   You can sprinkle enticing food with hot sauce, cayenne pepper, bitter apple spray, lemon juice, etc.  Provided your dog doesn’t love strange things and doesn’t thoroughly inspect food before eating, you have a chance at teaching your dog that food on the counter tastes nasty.

Some people report success from arranging a pile of tin cans or pie plates that will fall with a crash when jostled.  If you use pop cans put several pennies or pebbles in them and tape the cans shut with duct tape.  Also select some very delicious, temping, and smelly food to use as the BAIT.  Put the food in a plastic container with a lid (small butter containers work well) and punch some holes in the lid of the container (the container keeps the dog from getting the food).

There are several versions to this method.  You can try placing several pop cans right at the edge of the counter with just two or three inches between them. One jump from your dog will bring down all the cans, and make a terrific racket, which will also bring down the dog.  Another version involves empty cans that are stacked in a pyramid fashion with a loop of string around the bottom row. The bait of choice is tied to the string and left within the dog’s reach. The dog grabs the bait and upsets the stack of cans, which fall with a crash. The dog runs for cover and in so doing learns a lesson.

Another version involves enticing food, a cookie sheet, a thin rope, several pennies and soda cans and a good place for the human to hide.  Put the food on the cookie sheet—the smellier the better.  Put the cookie sheet far enough back on the counter so that the dog can’t easily see it.  Surround the food with soda cans that have pennies placed inside.  Attach the string to the tray in such a way that you are able to hide while still holding the string.  Wait for the dog to come in and find the food.  As soon as it commits to being bad, pull the string.  The trick is for the dog not to see that you made everything come crashing down.

There are several commercial products that you can use to deter your dog from getting on the counter.  The first product to consider is the Scat Mat.  You place the mat on the surface you want your pet to avoid.  If the dog touches the mat, it will give a very mild zing of shock not unlike static electricity.   You can also look into the X-Mat which is an inexpensive plastic mat with raised plastic nubs on it.  Like the Scat Mat, the X-Mat is placed on the counter and the dog touches it when it jumps up.  Unlike the Scat Mat, no shock is given; the aversion is that the bumps don’t feel very nice.

A more expensive option, which can be very effective, is a remote stimulation collar.  Without showing the dog what you are doing, but with the dog in the room, give him a tiny morsel of the food, just so he might “think” about stealing it from the counter.  Set up your trap.  Not too easy—place the food where it might be if you were distracted by the front door.  Pretend the doorbell rang and leave the room.  You will need to be hiding in a place where you can still observe the dog or can hear the noise.  As soon as the dog commits to counter surf, press the stimulation button.  The feeling is unpleasant and will startle the dog causing the dog to sense a correction without you being involved.  Odds are he will not touch it again today.  But, he will try again tomorrow.  It isn’t learned the first time, but having a dog create his own corrections, helps eliminate the behavior quickly.

Be Proactive not Reactive

With any training it is better to be proactive than reactive.  By preventing your dog from having opportunity to learn to regard the kitchen counter, kitchen trash can, and outdoor trash cans, as being sources of food to be raided, you can prevent countersurfing.   It is important as well to be prepared to train your dog through whatever means necessary to regard this temptation as one worth resisting.

Remember the food on a table is still yours even though it is not in your hand.  Even if you leave the room for a few minutes,  your dog still needs to respect this.