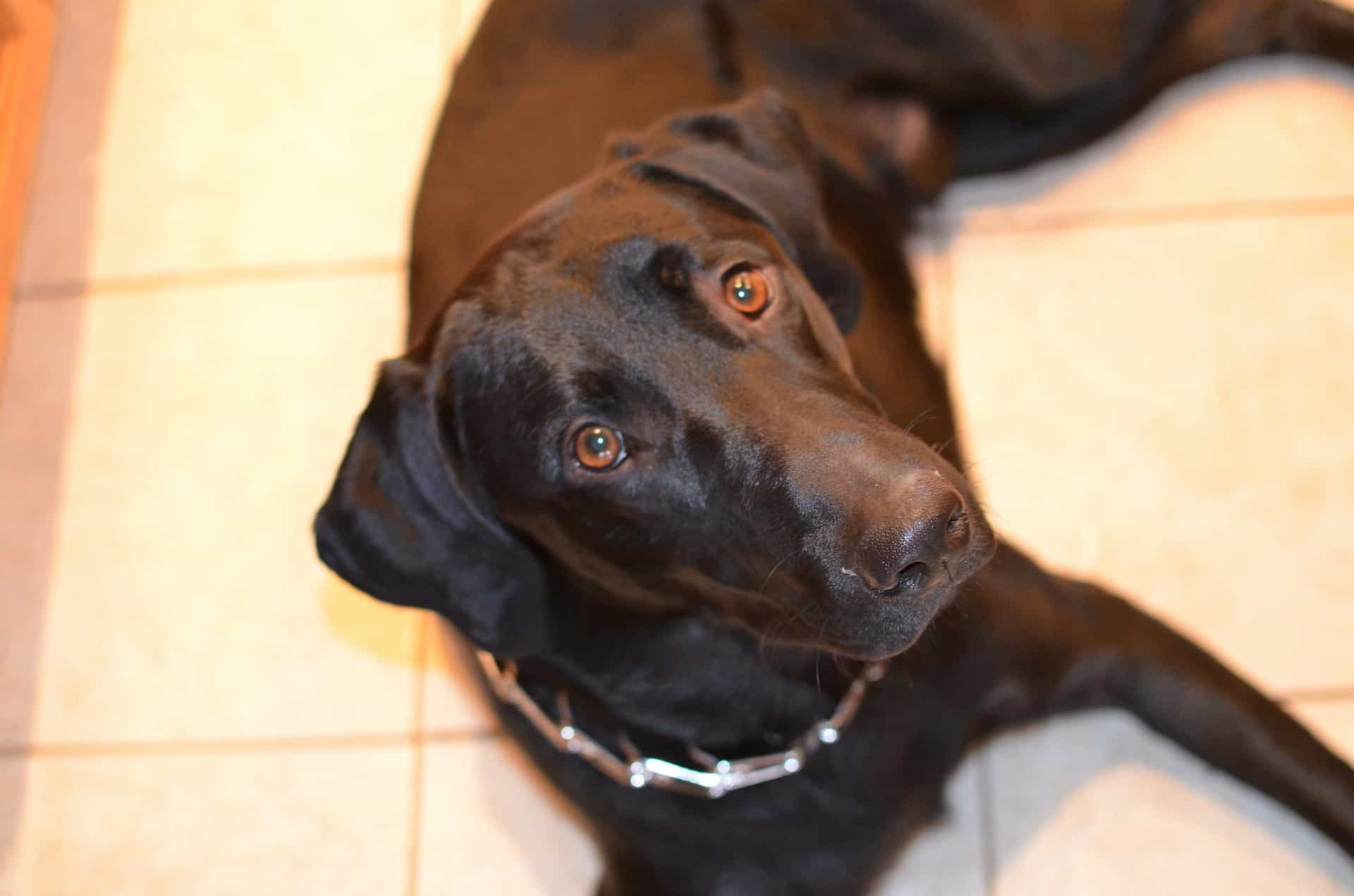 The pinch collar is a misunderstood, misused, and underused tool that can be of genuine value to the dog trainer.

My Theory on Why a Pinch collar works

Most people assume that the pinch collar works as a negative reinforcer or a punishment because it causes a sensation of pain.  Therefore, those who can’t stand the thought of inflicting pain on their beloved dog refuse to use a pinch collar.

Then there a those who are all too willing to use pain as a motivator.  They assume the more, the better and use the pinch collar harder than necessary, often with adverse results.

But those who love their dog and recognize that the contrast between pleasant and unpleasant consequences of the dog’s right or wrong response to a given stimulus greatly aids the dog in learning.  These dog owners will generally read their dog well enough to use a pinch collar well, even though they believe it works because it hurts.

I believe that the true power of the pinch collar is the similarity in the sensation it makes when popped and released to the feeling produced by the mamma-bitch briefly grabbing the youngster by the neck with her teeth.

The impact on the dog is psychologically making the statement “I, your mother, don’t approve of your behavior” rather than through self-preservation psychology of causing pain.

Since the bitch rarely bites the puppy’s neck very hard, it should not be necessary to give more than a moderate pop on the pinch collar, and indeed, for the most part, I find that light to reasonable “pop” is all that is needed. Only if the dog is quite excited with his attention intensely focused on some object or activity, thus dull to perceive other sensations, would a more robust jerk be needed for the dog to notice it and respond. Therefore an appropriately gauged pop will gain the dog’s respect for the leadership of his handler and will impress him that the behavior in which he was engaged is disapproved, but it should not make him feel fearful. I hope the recognition that one does not necessarily need to inflict severe pain on the dog will encourage those of you who have previously been unwilling to use this valuable device to try it — especially if your training mentor advises you to do so and is willing to supervise your first few attempts.

In line with this “sensation of mamma’s teeth” theory, we might also put this quality to work when we give a scruff shake or a muzzle-surrounded-by-hands type rebuke by including a bit of poking or pinching sensation from our fingernails to simulate the teeth of the bitch. (Those who bite their nails are out of luck.) Those who use any of the muzzle-constriction halter-like devices sold under various names (“Halti,” “Kumalong”) are also utilizing a mamma-bitch rebuke and could emphasize this (if needed) by putting a few blunt rubber nubs on the inner surface of the noseband.

(Update: “Kumalong” seems to have dropped by the wayside, but the “Halti” has become popular, and the halter formerly known as “Promise” and now known as “Gentle Leader” has become popular. Today everyone advocating the use of halters proclaims that the psychological basis is the communication of social dominance, i.e., the mamma-bitch message and the pack-leader message, telling the dog to relax and be subordinate and follow the leader’s cues.)

The Ghastly Appearance of the Pinch Collar

There’s little doubt that the appearance of the pinch collar, looking very barbaric, causes many people to believe it must be an instrument of torture.

Those who know better may still be unwilling to use one in public because they fear the disapproval of those who see this ugly contraption and believe it to be an implement of torment. Well, there’s an easy answer: camouflage. You could tie a bandanna over the pinch collar, which looks quite dashing and is considered stylish by some. You could stitch a wide flat band of leather or fabric to the outside of the pinch collar. My answer has been to flatten the links slightly and slip the collar inside a length of 2″ wide tubular nylon webbing (from the camping store), then poke the prongs through the inner surface of the webbing. The sole disadvantage of the latter two methods is that they make it difficult to shorten the collar by removing links; one can still add links easily to lengthen it. Any experienced dog trainer will quickly spot a camouflaged pinch collar and smile knowingly, but the non-dog training ignorant public member will never guess. Those matches that forbid the use of pinch collars will generally forbid a camouflaged pinch, even though the reason given for the prohibition is “well, we are in a public place, and so we have to think about the way we appear to the general public.” (Note: halters are also disallowed at AKC events. The rationale for this is unclear to me.)

(Update: interestingly, those who use a halter often find that members of the ignorant general public look at it and think it is a muzzle and that, therefore, the dog wearing it must be a dangerous biter. So much so that “Gentle Leader” sells a button one can wear on one’s shirt that proclaims, “It’s NOT a muzzle!” Of course, many who use halters welcome the chance to educate others about what they are. As these tools have become more popular, the public recognition as a pleasant means of dog control has increased.)

What’s In a Name?

These names discourage many people who need such a collar to control a strong or unruly dog from using them.

Many shrewd training class leaders recognize this and refer to this tool as a “power steering” collar or “the equalizer.” These names seem to help make those who need this tool more willing to use it. Such names imply that the handler uses it to compensate for his relative lack of physical strength compared to the dog, which is often true for many women and slightly more than middle-aged persons when dealing with a healthy and exuberant young Bouvier or Rottweiler. Still, the implication is that the collar operates in the physical realm rather than the psychological one and fails to emphasize the concept of the mamma-bitch.

Let me suggest to those looking for another name for our friend the pinch collar they might refer to as the “mamma-bitch” collar or the “listen to me; I am your Mother !” collar.

Yea, verily, if thou wouldst train thy dog, thou shouldst go to the bitch: consider thou the ways of the mamma-bitch and emulate her!