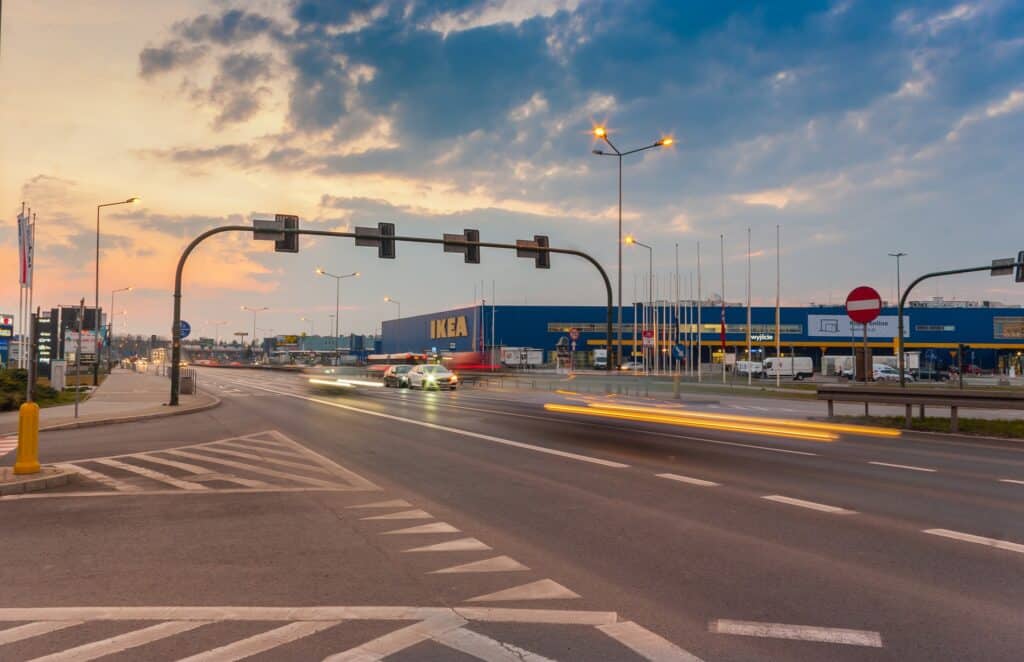 This article will sniff around for the details of IKEA’s pup-friendly policies so that you can plan your next furniture shopping expedition accordingly.

Unfortunately, you can pretty well assume that your nearest IKEA probably isn’t dog-friendly. Though, if you’re lucky, you may live nearby one of a select few IKEAs which do, in fact, welcome dogs, but it’s not likely.

With that being said, you can expect that nearly all IKEA stores allow service dogs (which are also called assistance dogs), though know that emotional support or house-pet dogs don’t fall under that category.

Is IKEA dog-friendly or not?

You can fairly confidently assume your neighborhood IKEA is sadly not dog friendly. Being a multinational company with about 422 stores in 50 countries, IKEA’s rules for dog-friendliness vary from continent to continent. Still, the vast majority aren’t indoors-friendly towards dogs that aren’t service pups.

IKEA has addressed dog-friendliness directly; for example, IKEA Australia released a statement saying, “We love pets! Unfortunately, we are unable to allow them in our stores unless they are genuine assistance dogs.” To clarify, assistance dogs are the same as service dogs (though ‘service dogs’ is more an American term, while ‘assistance dogs’ is the globally accepted term).

Why doesn’t IKEA allow dogs inside its stores?

There are three reasons why IKEA stores generally aren’t dog-friendly, and they’ve seemingly crafted these reasons based on what they believe is best for all customers.

Most IKEA stores want to avoid creating a more raucous store environment, where untrained dogs may bark and bother customers who get startled around doggos.

Also, there have been reports of dogs having potty accidents in previously dog-friendly IKEAs, which led to their blanket decision to shut their doors to dogs.

Also, many IKEAs have restaurants inside, and often local governments don’t allow dogs where food is prepared. One example of a country like that is Canada.

To avoid the risk of contamination, pet dogs and other animals are not permitted. This falls in line with the FDA’s Food Service Codes. These state that no animal can have access to any business in which food is sold or served.

Similarly, IKEA store managers are probably also thinking about customers who may have allergies to pups, with IKEA’s furniture potentially collecting hair and dander.

Finally, IKEA stores are most likely trying to prevent worst-case scenarios, such as dog bites, before they happen. Most dogs are well-behaved, especially if their owners take time to train the dogs, but with 422 large stores worldwide, it’s understandably only a matter of time before a couple of untrained dogs hamper the rules for everyone else.

These three criteria are very similar to the ones considered by Ontario health authorities when they decided to change policies for Toronto’s dog-friendly patios.

Which IKEAs are still dog friendly?

Do you happen to live in certain towns in Switzerland? If so, many of their IKEAs are dog-friendly. Although most IKEAs aren’t dog-friendly, a select few IKEAs are dog-friendly, though they’re small in number. These towns include Vernier, Aubonne, and Grancia, among several others. Their main rule is that your dog needs to be on a leash, and you’d undoubtedly want to let your dog do their business before trotting inside.

Interestingly, with a bit of research, you can find reports of IKEAs which used to be dog-friendly but no longer are. For example, a past worker of a Seattle IKEA reminisced that, in the early 2000s, customers would regularly frequent that IKEA with their pups.

However, after a string of potty accidents from a certain customer’s standard poodle, that particular Seattle IKEA banned dogs from entering the premises permanently. Unfortunately, circumstances like that show it only takes one bad experience for blanket bans for all dogs.

Also, it makes you wonder how many other IKEAs used to be dog-friendly until an accident occurred.

Knowing many of their customers would love to bring their dogs along, some IKEAs have addressed their lack of dog-friendliness with a slight compromise – dog parking.

Some IKEA shops have dog parking areas outside (particularly in Europe); you can find “dog bays” or shaded areas outside the store specially designed for customers to hitch their dogs to posts.

It’s worthwhile to note, however, that IKEA almost certainly wouldn’t let itself be liable for anything happening to your dog at these dog bays while you’re doing your furniture shopping, so be careful if you use them.

If your dog is a service dog, they’re the exception to the rule and more than welcome inside IKEA stores. However, does the same exception apply to therapy dogs or emotional support animals (ESAs)?

Unfortunately, the answer is no — ESA dogs don’t classify as service dogs, so they’re also not allowed within IKEA store premises either.

One Yelp reviewer confirmed as much, commenting that “only certified service dogs are allowed. Emotional support animals are not allowed. They may ask you if your dog is a service dog and what the dog does for you.”

What’s the difference between an emotional support animal and a service dog?

For example, professionals may train a service dog to open doors, sense allergens, or pick up items and often respond to various people’s commands. In contrast, ESA dogs aren’t necessarily professionally trained and are mainly responsive to their owners or family unit commands.

For the most part, service dogs generally are also much more rigorously trained than ESA dogs, often passing standardized tests by accredited organizations of the region. In contrast, ESA dogs either don’t have to pass tests, or their testing is much less tricky.

Delving into more specifics, here are three attributes of service dogs helping to differentiate them from therapy dogs:

Those details make it more understandable why service dogs are treated differently by companies like IKEA compared to ESAs. However, that’s not meant to discount the vital role ESAs serve worldwide.

The Americans with Disabilities Act (ADA) protects the rights of those who choose to use service animals in public spaces. Under this act, an employee cannot refuse entry to a service animal as long as the animal continues to behave appropriately.

Do you need to show service dog documents in IKEA?

It is always good to have service dog certification when taking your service dog to IKEA. However, it is not necessary to show service dog documents all the time. Though, some stores may ask for them. So, it is best to be prepared. You can also call ahead and ask if certification is required before bringing your pup.

What do you do if you see a dog in IKEA?

Whenever you see a dog in IKEA shops, do not approach the dog or attempt to pet it. If you are the dog owner, have your service dog certification with you in case employees inquire about the status of your dog and if it is allowed to be in the store.

If you are not the dog owner and feel that it is not a certified service dog, find the nearest employee and express your concern. They are always happy to help.

Is there any dog friendly store I can take my furry friend to?

Now that you know most IKEA locations are off the table when it comes to bringing your furry friend along, are there any other pet friendly stores you can visit instead? Yes! Here is a list of some dog friendly stores you may be able to take your pup to on a shopping spree.

However, don’t just take our word for it. Before taking your dog to any store, it is always recommended that you call ahead and make sure it is okay prior to your visit.

You can see now that IKEA is one of many companies which generally isn’t dog friendly. There are some exceptions to the rules, such as within Switzerland and hybrid store setups (where you can hitch your dog outside), though, for the most part, only service dogs are allowed within IKEA stores.

Since that’s the case, it’s best if your pup relaxes at home while you choose your next dining table or kitchen set.