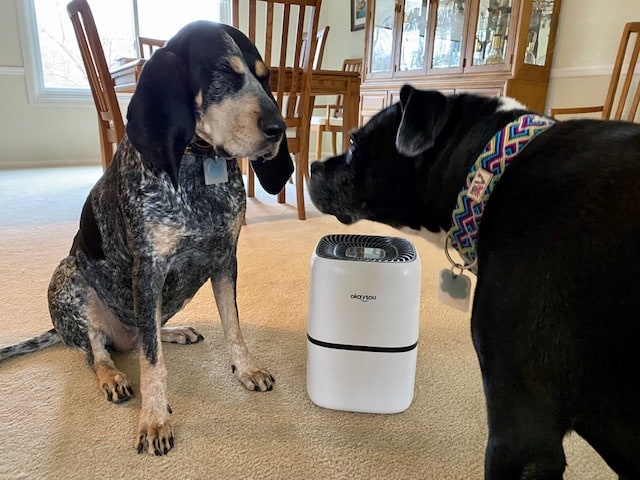 We love our pets; we love the happiness they bring, the companionship they provide, but no one loves pet odors.

Their odors hang around and stink more than your sweaty gym clothes.

Keeping your pets and home from smelling requires a mixture of regular grooming of your pets, making sure that your pets understand where they should eliminate, as well as maintaining a house cleaning schedule.

One trick that can make it easier to combat the unpleasant pet and home odor is using an air purifier. An air purifier uses a system of fans to pull the air in your home through a series of filters that remove airborne particles like dust, pollen, and bacteria. Then the air purifier circulates the purified air back into the room.

Okaysou asked Acme Canine to try their Okaysou Airmic4s Advanced Medical Grade H13 True HEPA Air Purifier with our pets. We agreed, and within the week, we had the air purifier at our facility. Their air purifier uses activated carbon filters adopted from the best medical-grade filters in the market. By using this system, the air purifier can capture and reduce up to 99.97% of airborne particles as small as .3 microns, including dust, pollen, pet dander, pet hair, smoke, household odors, harmful gases like formaldehyde, ammonia, VOCs. Which is pretty impressive when you think about the dirt and hair your dog can bring into your home.

The Ultra-Duo Air Purifier we received is designed for small to medium rooms (about 288 sq. ft.).  Acme Canine tested it in a bedroom where two dogs sleep with their owners, a medium-size room that houses a litter box for two cats, a laundry room where dry dog food is kept, a kitchen and a living room with a fireplace.

It’s been five weeks now, and we have fallen in love with this unit 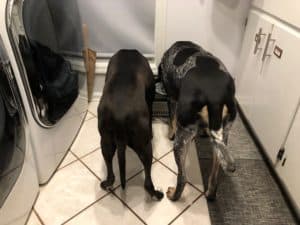 We tested the air purifier for several nights in a medium-sized bedroom where two 70 lb dogs sleep on blankets and dog beds. Sleep was uninterrupted. We used the sleep mode but no night light. The air purifier was quiet.  It filters the air 3 times per hour in a room up to 288 sq. ft.

In the mornings after taking a shower, we would enter the room and smell the air. No dog odors and no need to spray Lysol to freshen the room.

We also tested the air purifier in the laundry room. The room naturally has a funk about it since this is where the dry salmon dog food is kept and served. Within 13 minutes of turning the air purifier on, the fish odor was gone and replaced with nothing, just clean unscented air.

The air purifier moved to another home with two short-haired cats. It ended up in the “cat room,” a medium-sized room that contains the litter box. For testing purposes, the litter box was left uncleaned for ten days. The Okaysou Airmic4S Medical Grade Air Purifier worked its magic for eight days before the litter box odor was too much for the unit to handle. We thought that was pretty impressive.

In the kitchen, the air purifier worked great at removing burnt bacon, fish, and sauerkraut odors.  It also was able to remove a residual smokey odor left from the fireplace in a medium-sized family room. 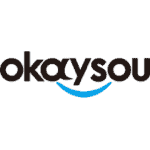 If you’ve ever struggled with unwanted pet odors (old or new) in your home, consider this air purifier. For about $80 in cost, it really packs a punch, especially in smaller rooms.  Acme Canine gives it 5 paws up.

If you have the same unit and have additional information (both positive and negative), feel free to share it with us…