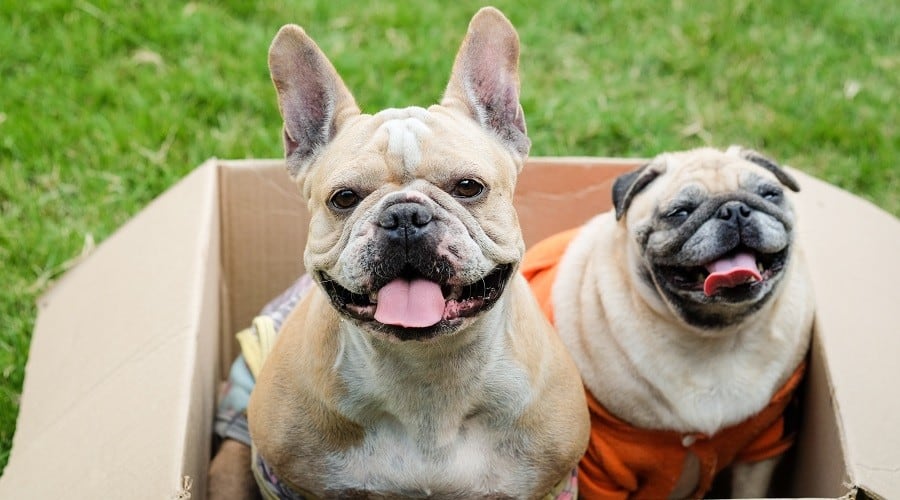 If your dog buying decision comes down to a contest of cuteness, you might find two breeds in an absolute stalemate: the pug and the French bulldog. You would be hard-pressed to call one cuter than the other.

These slight and flat-faced pups have been beloved across the world for generations, and either one could steal your heart in an instant. They have quite a few similarities and some marked differences, most notably in their average weight and the shapes of their ears.

Unfortunately, the flat face that makes these breeds so distinctly cute is also at the root of some of their health challenges (more on this below).

If you are looking at both breeds as you consider what canine may be best suited to your family and lifestyle, we will walk you through everything you need to know about them to inform your decision.

The pug dog has a long and even regal history, dating back as far as 700 B.C. These dogs were a favorite breed among Chinese emperors; they became a symbol of honor and royalty when only given to those appointed by the kingdom.

Eventually these beloved dogs made their way to other parts of the world; Dutch travelers returned from China and brought them into the Netherlands. They are a popular breed in America today and are often mixed with other small breeds. 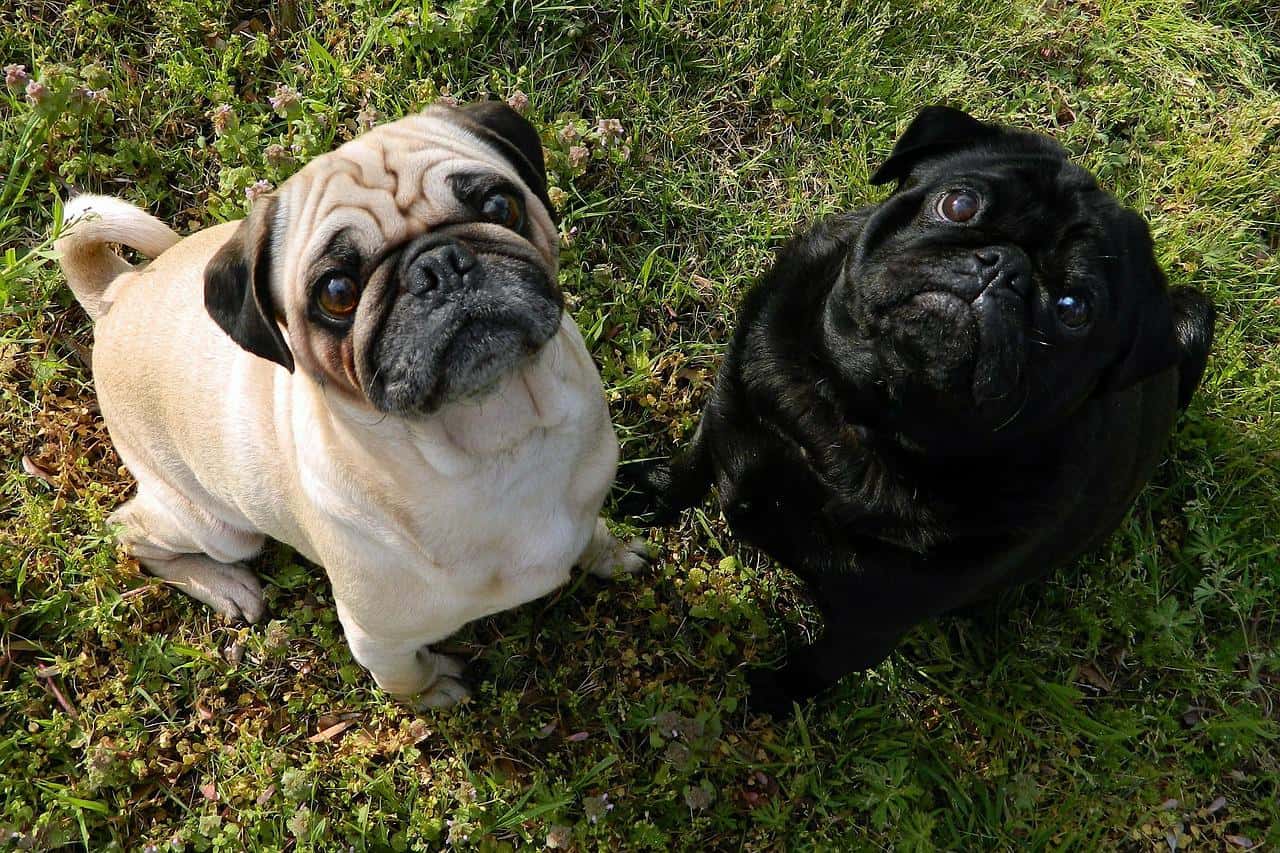 French bulldogs are, first and foremost, not French! The breed originated in England and was also referred to as toy bulldogs. They ended up in France when the English lace traders who loved this breed saw their industry dwindling and relocated to the French countryside with their favorite canines. Sometimes mistaken for Boston Terriers, French bulldogs are an extremely popular breed in America today.

If you find yourself deciding between these two breeds, a rundown of their common traits and characteristics could help steer your decision to the canine best for your family and lifestyle.

Pugs and French bulldogs have similar features, and they are certainly confused occasionally by people who do not know how to detect the differences among flat face pups.

We will walk you through what you need to know about each dog breed, from their physical features to temperament and more.

Hint: you can always spot the difference by their ears. The pug’s ears flop down while the Frenchie’s ears stand up (these are known as “bat ears”).

Then the ultimate decision will rest with you to go for the pug dog, the French bulldog, or an entirely different dog breed altogether! 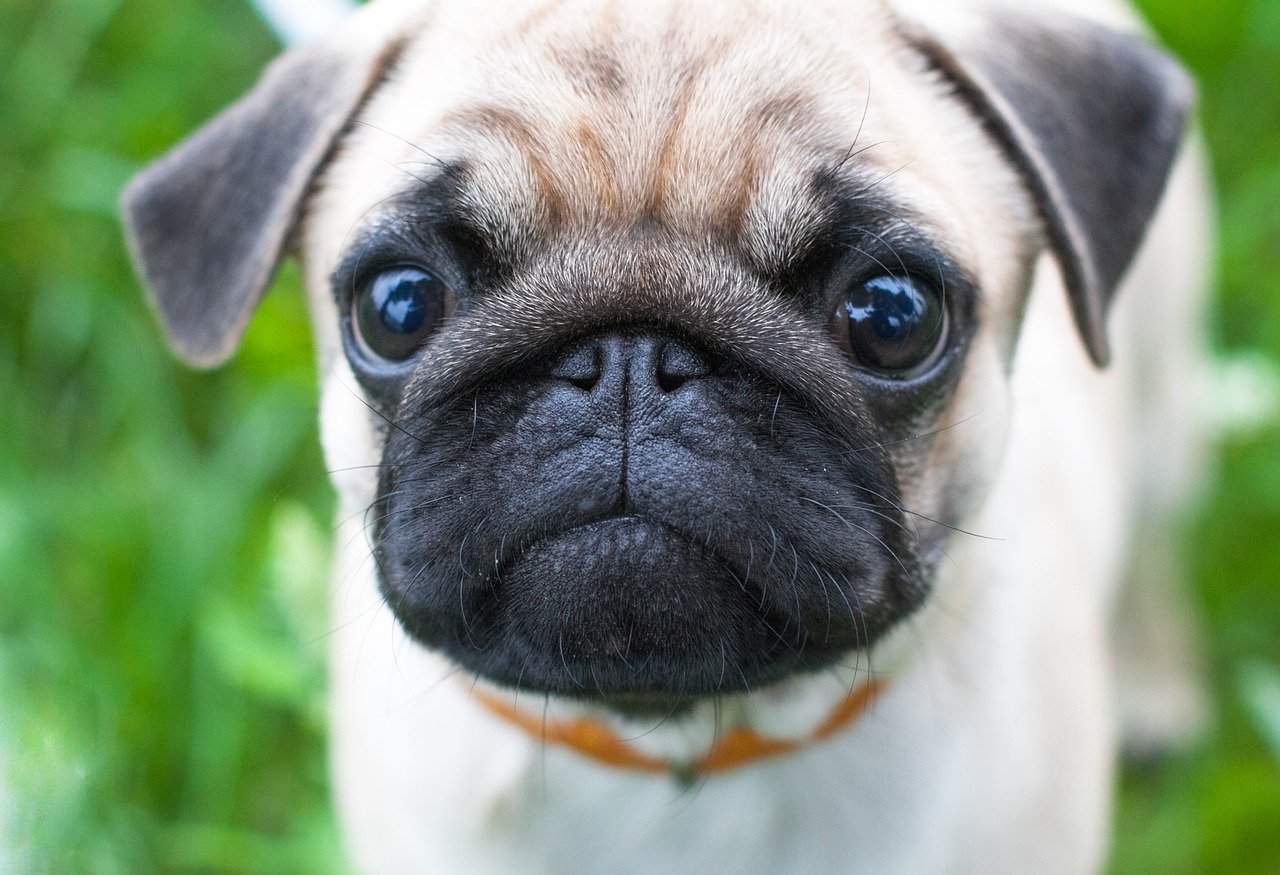 Pugs are small dogs, and they are perfectly sized for living in smaller spaces. City dwellers can easily manage a pug in a compact apartment (as long as she still gets out for walks in the fresh air!)

A pug generally weighs between 14 and 18 pounds. As far as height goes, the full-grown pug will reach somewhere between 10 and 14 inches. 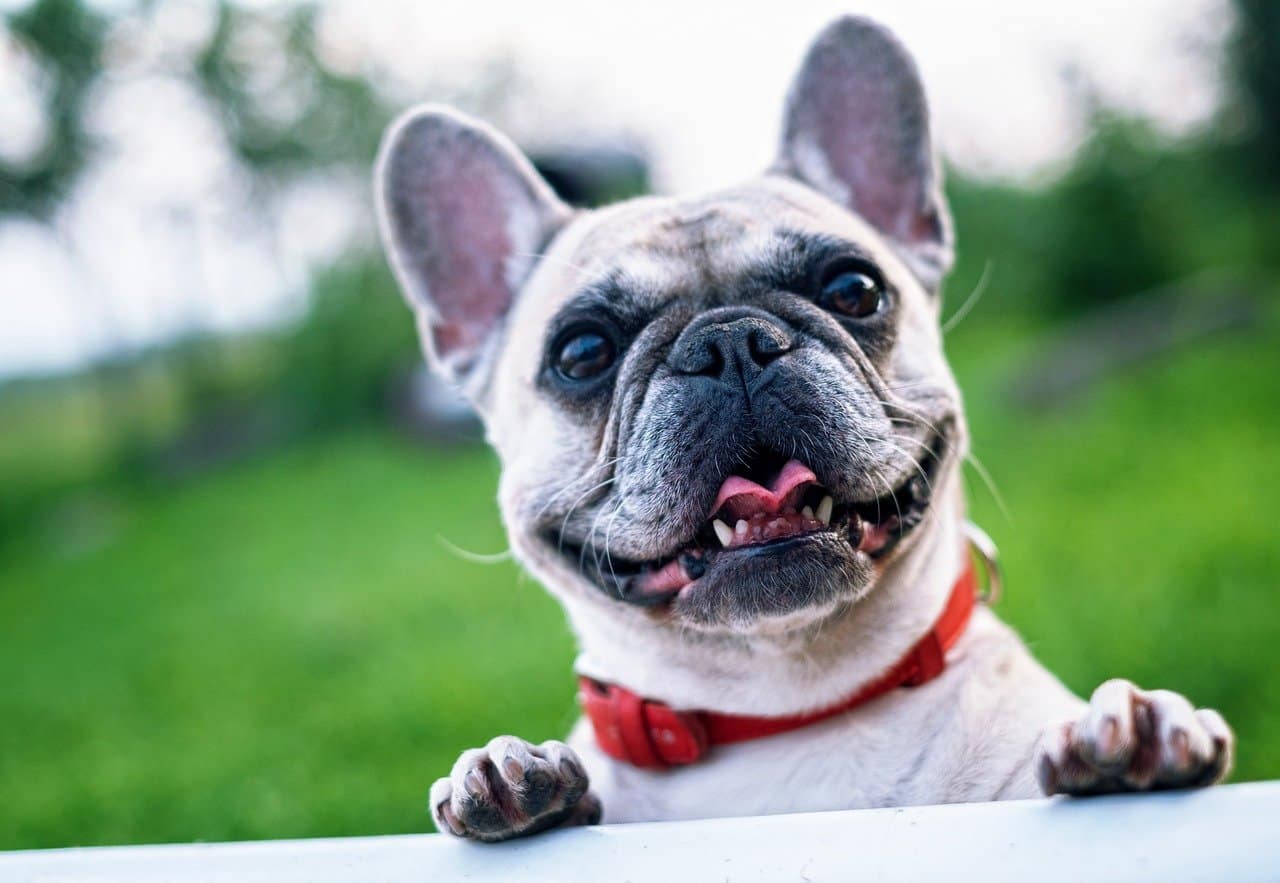 While a Frenchie can still be a good pick for a family living in a smaller space, they are generally bigger than pugs by a considerable amount.

Weight-wise, the French bulldog has a stockier build than the pug, with the weight falling somewhere between 20 and 30 pounds. You can tell the difference when you pick up a 14-pound pug versus a Frenchie twice its weight!

The two breeds line up when it comes to height. French bulldogs also grow to a maximum height of around 14 inches.

Therefore, weight could be the determining factor in your decision. If you have reservations about lifting a 30-pound dog, then being a French bulldog owner may not be the right role.

If you have small children, pugs make great pets because of their compact size and because they are friendly and affectionate. Pugs seem to maintain the silliness of a puppy stage throughout their lives, staying mischievous and playful even when fully grown.

While their overall temperament is pleasant, pugs do have separation issues, resulting in excessive barking or bad behavior.

Like pugs, Frenchies are pleasant, playful, and lovable. However, this small dog tends to be more laid back and less active than pugs. They are great with small children, but they could also be a better fit for seniors than the more active pug. 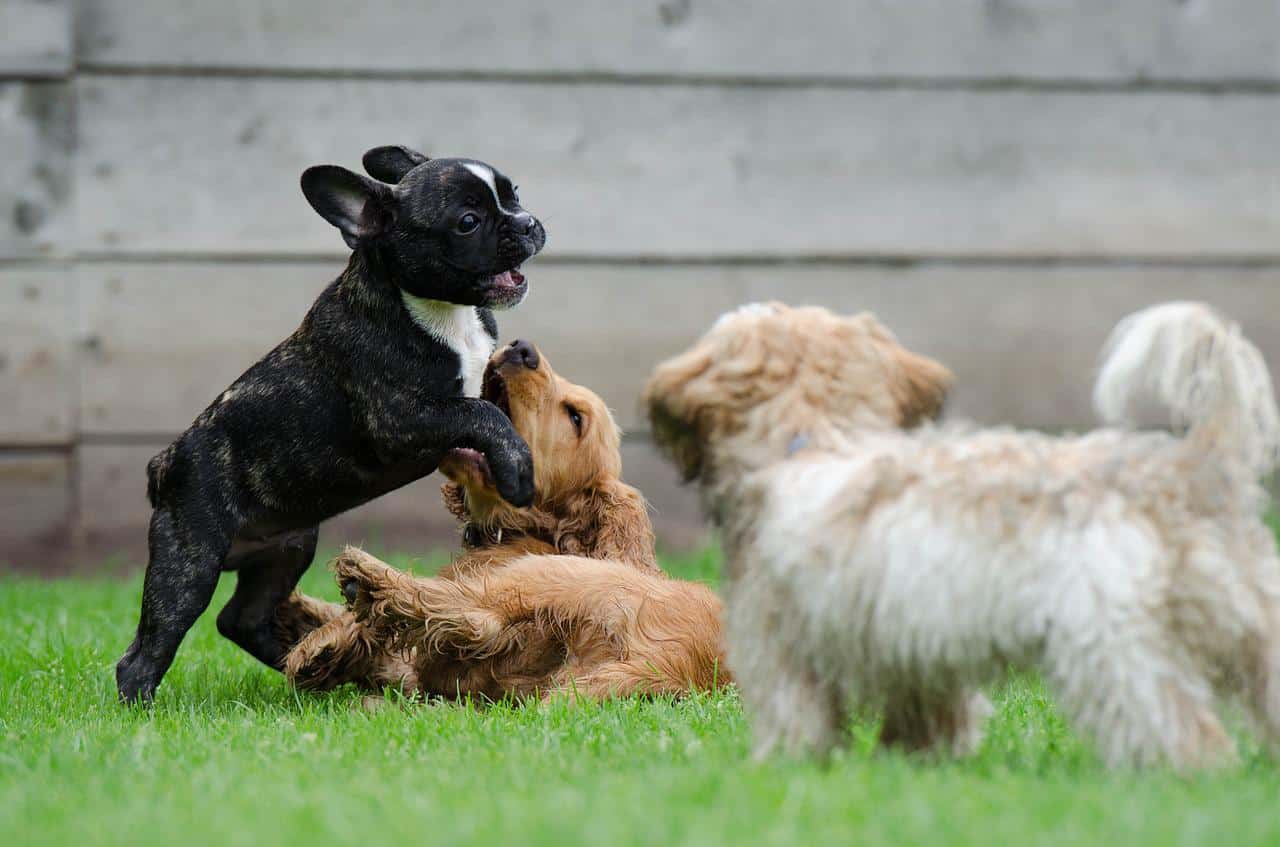 French bulldogs also experience separation anxiety if left alone for long periods, so if you work incredibly long hours without other family members to look after the dog, this may not be a good fit for you.

The folds of skin that give pugs their distinctly cute appearance can also be a downside if they are not groomed properly, with an unpleasant odor as a result. A pug should be brushed a few times each week and bathed every few months (unless they have gotten especially dirty outside or exercised more than normal).

A pug sheds more than a French bulldog, so expect to do a fair amount of “lint rolling” and vacuuming!

A Frenchie also needs regular brushing and bathing, but she will not shed as much as a pug.

Both breeds should also have their nails trimmed professionally, and their teeth brushed often. Proper grooming, especially brushing and cleaning around their wrinkles and folds, can help prevent infection.

Be sure you also use gentle grooming products specifically made for dogs so you will not irritate their coats; ask your veterinarian about the best products to use to gently clean your pug or Frenchie.

If you start out with a puppy, you may have your hands full to train and housebreak a pug. They can be stubborn and are harder to train than French Bulldogs. However, you can teach a pug to respond to commands and positive reinforcement with patience and persistence.

Frenchies are generally easier to train, thanks to being more laid back by nature than the stubborn pug. The French bulldog will respond and follow commands if you keep training sessions short and playful.

A pug will typically live for 12 to 15 years, giving him a nice span of time with your family. They face some health concerns (that we will get to below), but you can expect a pug to be with your family for more than a decade with proper care and nutrition. 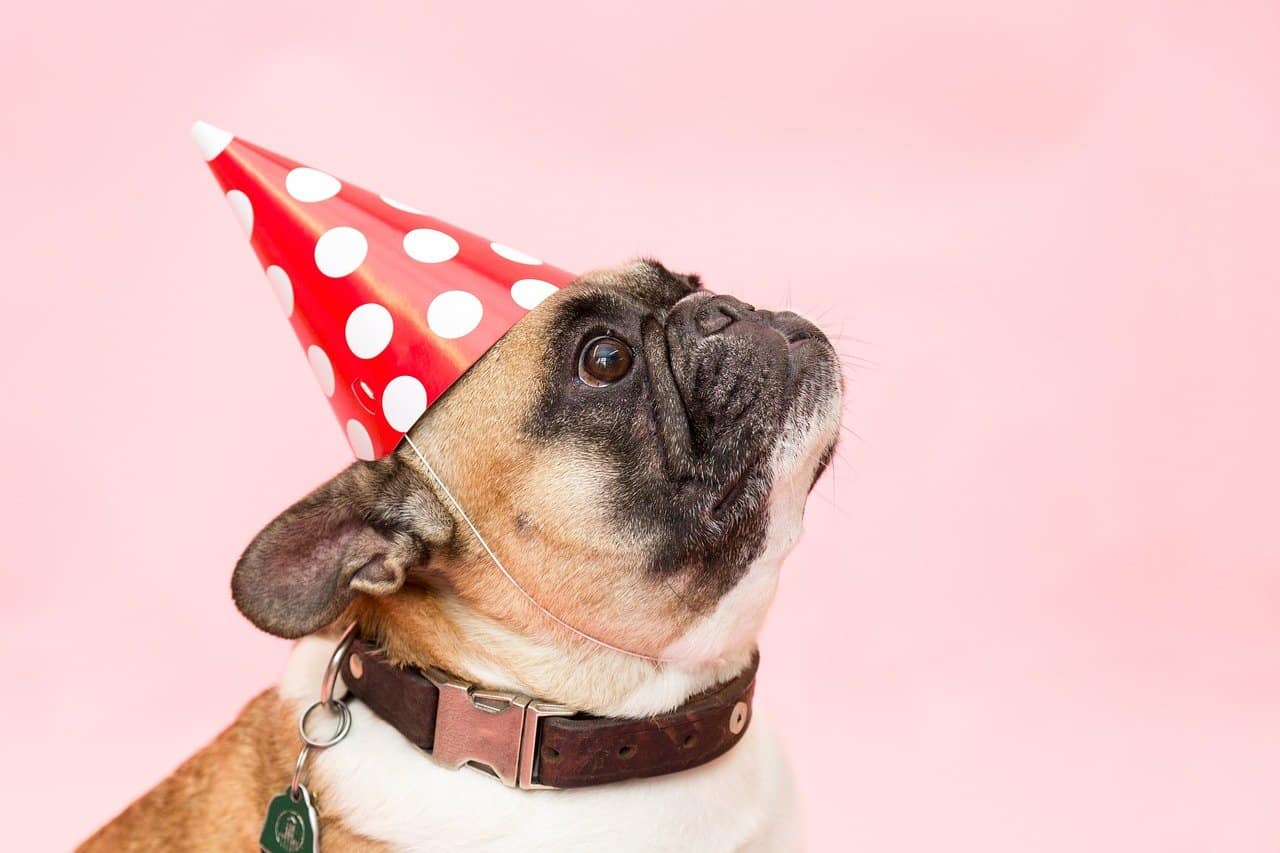 The French bulldog will generally not live as long as a pug. Frenchies have a typical lifespan of 10 to 12 years.

A pug’s precious face is often one of her greatest health issue challenges, with the flat face causing airway issues. Pugs are likely to suffer from brachycephalic obstructive airway syndrome or BOAS.

If a pug suffers from BOAS and breathing difficulties, several other challenges, such as obesity and frequent snoring, will often follow.

Pugs also tend to experience eye problems, skin allergies, and more serious conditions such as epilepsy and hip dysplasia. As a pug ages, you could see considerable health challenges (and vet bills).

French bulldogs face similar problems with their airways because they also have flat faces and “pug” noses.

The shape of a Frenchie also contributes to a high likelihood of intervertebral disc disease. With their narrow hips, breeding and birthing are especially challenging. French bulldogs are often birthed via Caesarian section.

To add a pug to your family, you should expect to spend anywhere from $1,500 to $6,000 with a breeder. Due to the health concerns outlined above, you can also expect pugs to be fairly expensive dogs over a lifetime.

Because Frenchies are often born via Caesarian section, they tend to be a slightly more expensive breed than pugs.

A Frenchie will typically cost anywhere from $1,800 to $8,000, making them a significant investment in terms of a family pet. Beyond that initial cost, you will also need to expect a fair amount of veterinary costs associated with the long-term care of a French bulldog.

Pug vs French Bulldog: Which Breed Is Right for You?

These breeds are great for city dwellers thanks to their relatively small stature, though a Frenchie can weigh twice as much as a pug.

They are happy and affectionate dogs who generally make great house pets, but they require a great deal of attention unless you want to deal with excessive barking and acting out.

Overall, we love both breeds for their sweet demeanor and those incredibly lovable faces. Your choice will likely come down to the weight difference and perhaps the cost. Either way, you will find a breed your family will love.