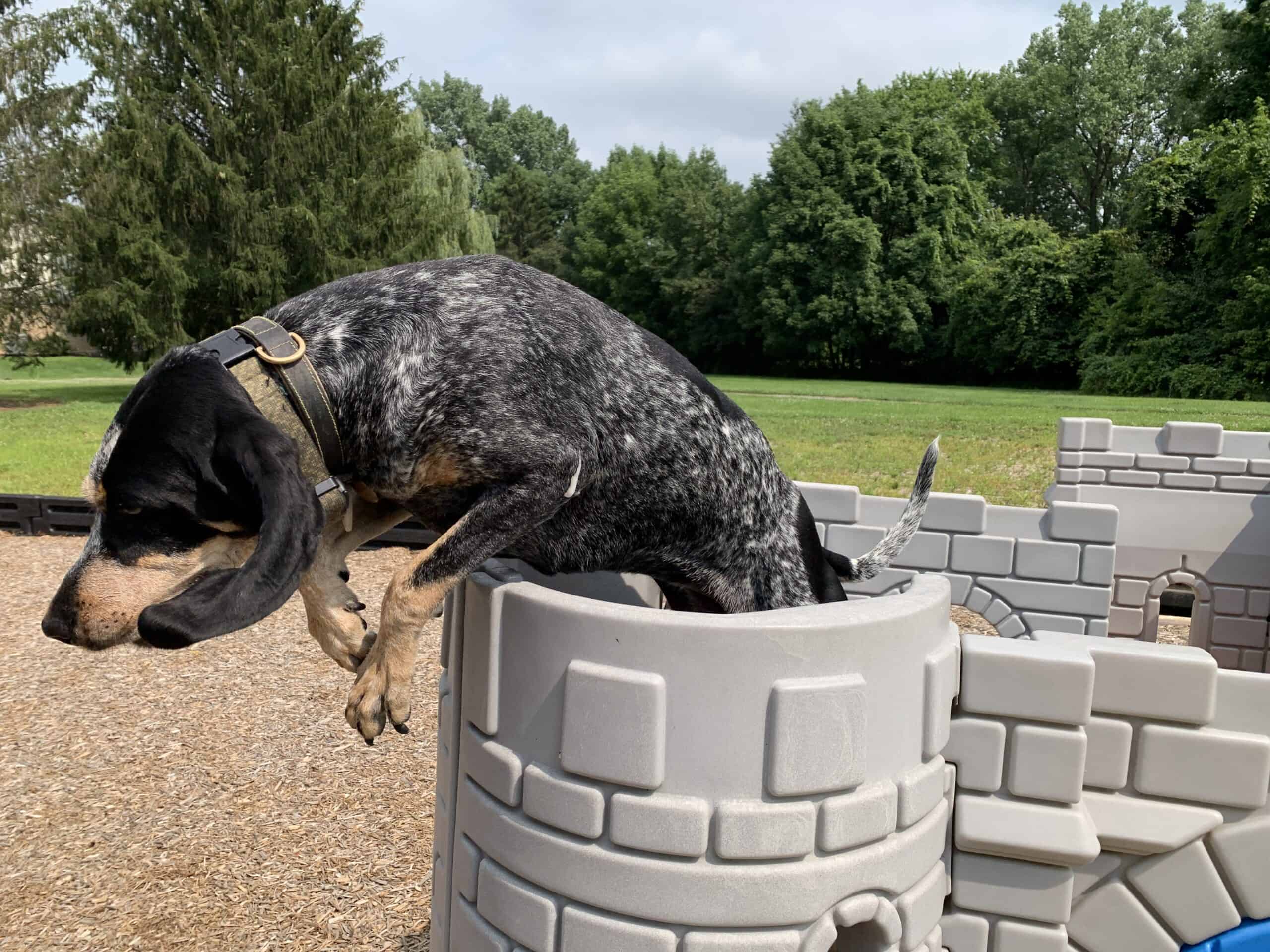 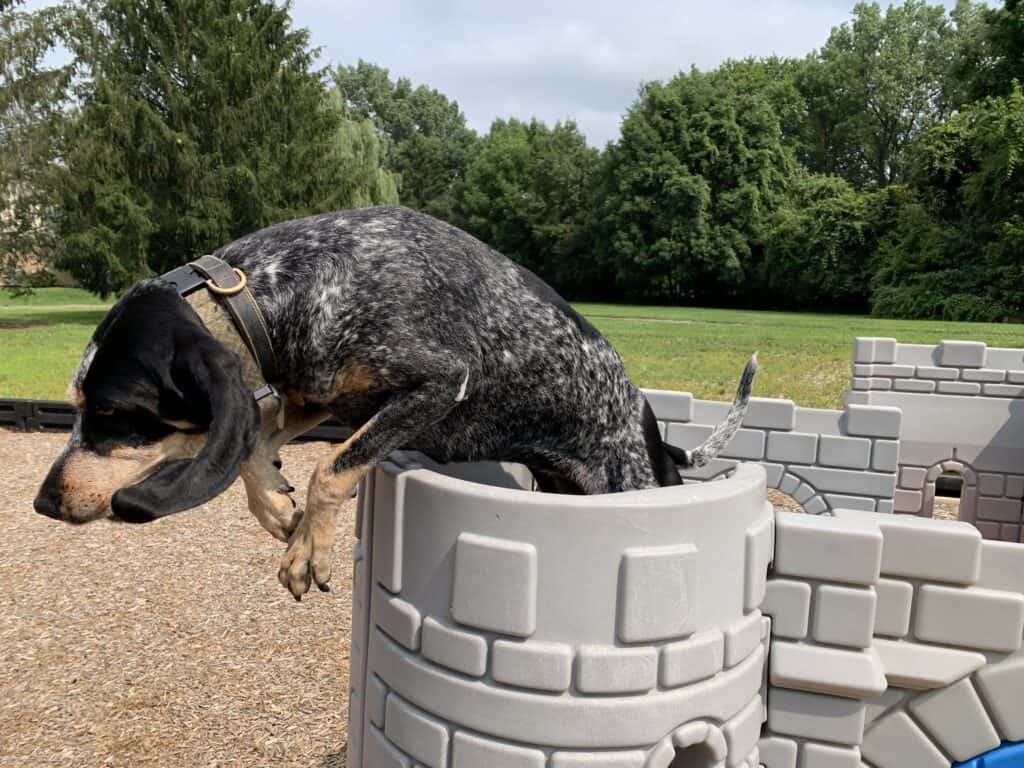 These instructions focus on training a dog to perform tricks mainly for fun, but in principle, you can use the same basic ideas for training a dog for obedience.

There are as many different training methods in the world as there are handlers (or dogs). This is fine because each dog is an individual, and you can’t teach them all by using the same methods. I believe that it is important that you and your dog have fun when you are doing this. These instructions focus on training a dog to perform tricks mainly for fun, but in principle, you can use the same basic ideas for training a dog for obedience competition, etc.

Dogs learn fast if they are motivated, i.e., if they really want to learn. To teach your dog to perform some tricks, it’s a good idea to choose a trick that you at least think your dog might enjoy doing. This often means that if your dog has never carried anything in his mouth, you should not start by trying to teach him to retrieve or carry things. It will be possible to teach almost any dog to retrieve, but maybe you should start with something easier or completely different, like ‘shake hands,’ play hide and seek, etc.

Be clear in your expectations.

To learn the desired trick, the dog needs to know when he is doing the right things. If you toss a tennis ball from your hand and say ‘retrieve!’, many dogs run after the ball as desired, but it’s unfair to expect the dog to know that you want the ball brought back to you unless you can clearly ‘tell’ him that. To ‘tell’ him when he is doing right, you should praise him at the exact moment when he is starting to do the right thing. For example, when the dog grabs the tennis ball into his mouth and takes a step towards you, you say ‘good boy!!’. If he drops the ball or runs away from you, you give the command again. And again, when he takes even one step towards you, you praise him. This way, the dog gradually realizes what you want him to do, and when he has realized that, you can also demand more.

Use an appropriate reward. 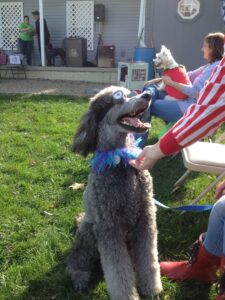 Use the kind of reward that your dog appreciates. Some dogs love treats. Some dogs don’t care about the food that much but may prefer to play with their favorite toy for a while as a reward. However, always use your voice as a reward: use your happiest voice to tell your dog how smart and good he is when doing the right thing. This way, you will not have to use treats/toys every time you train your dog — he will soon understand that the vocal praise (and sometimes pats and hugs) mean that he has done what was expected of him.

I always prefer using much more praise than ‘NO!s’. In the beginning, it’s unnecessary to tell your dog that he has not done what you expected of him if you are consistent in praising him when he does the right thing. Besides, teaching tricks should be fun for both of you, and I can’t imagine either of you enjoying it very much if you end up screaming ‘NO!’ all the time. Of course, there are some exceptions — If your dog starts to chase a rabbit in the middle of your training session, you naturally shout ‘NO!’ to him and get him back.

Break the trick into smaller pieces

If the trick is relatively complicated (like teaching your dog to bring his own toys into a box or similar), you have to split the trick into several substeps that you teach one at a time and then try to combine them. For example, if you try to teach the fore mentioned trick, first teach your dog to carry his toy, then to put it into a box, then to find the toy and bring it into the box, and then to do this with all of his toys. You must realize when a trick is too complicated to learn in only one step. It’s better to proceed too slowly than too fast.

Don’t wear out your dog

Don’t practice too much at any time; practice often (you can practice as often as 1-3 times a day if you wish) but only for short times. The dog learns best when you quit each session when he still would like to go on — this way. He will be motivated to continue the next time. If your dog seems bored by the trick, take a break from training, or teach him something else that he might enjoy more.

Decide what you would like to teach. Start with simpler tricks (shake hands, dance, retrieve something, etc.) and proceed to more difficult ones if your dog learns fast. It’s a good idea to start with only one trick at a time, but later, you can work on a few different new tricks parallel if you wish.

When you have decided what you want your dog to learn, think of a command for that particular trick. The command can be anything you wish, as long as you will be consistent with the use (e.g., not use the same command for something else) and as long as the command doesn’t resemble some other command that your dog already knows. It’s usually a good idea to choose relatively short words. Unlike some other people, I prefer using nouns as commands instead of verbs because there are always more nouns to choose from, and also because it’s often much more confusing to use verbs. For example, you can teach your dog to retrieve a thrown object by using the command ‘retrieve,’ but if you want him to bring you the desired object that you have hidden (or lost), there’s no point in saying ‘retrieve the ball!’, ‘retrieve keys!’, when simply ‘ball!’ or ‘keys!’ would be enough.

Here are some examples of tricks to teach to your dog and my suggestions for how to proceed. Once your dog has learned some/all of these, you probably have an idea how to proceed with other tricks. 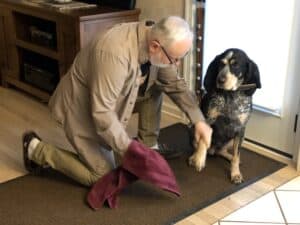 This is one of the easiest tricks to teach to a dog. First, you must teach your dog to sit on command. Probably the easiest way to teach a dog to sit on command is to have a treat (dog biscuit, piece of cheese, etc.) on your hand, lift it above the dog’s nose, and say ‘sit!’. If the dog is standing and tries to grab the treat, don’t let him get it, but repeat the same maneuver. When he sits, immediately give him the treat and praise him. Repeat the trick a few times.

Another way to teach a dog to sit on command is straightforward but takes a little more time: each time you see that your dog will sit, tell him to ‘sit!’ and praise him when he does that (+ give a treat). It doesn’t take many repetitions for the dog to realize what the command is for, but this still takes longer than the above-mentioned method.

Some people suggest you teach a dog to sit on command by pressing his butt on the ground while saying ‘sit!’. I suggest you first try the other two methods, though, to see how easy it is to teach a dog even without using force. Later, once he has clearly understood the meaning of the command ‘sit!’ you can use this method if he doesn’t obey you. Try to be gentle, though. There’s no point in causing the dog pain when teaching him tricks.

Once your dog has learned to sit on command, you can proceed to ‘shaking hands.’ Give him the command (‘say hello!’ or whatever), gently hold his paw with your hand and give him a treat with another hand. Repeat this a couple of times — most dogs learn this very fast if your timing (the command + the praise and treat) is right.

This trick is easiest to teach to a dog that jumps against people. The advantage of teaching this trick is that once the dog ‘dances’ on command, he doesn’t put as much weight (maybe any at all) on people as jumping against them. Thus it is an excellent replacement behavior for a dog who jumps too easily.

When the dog is excited and jumping around you, tell him to ‘dance!’ and gently hold his front legs and lift them so that he stands on his hind legs. Then praise him and give him a treat and gently put him back on the ground.

Once he knows how to do this, you can see if he can do it without your help. Small dogs seem to be able to balance themselves better than large dogs – with Woofie, I hold his front paws, and we dance together because he doesn’t seem to be able to stand up on his hind legs very well without help. 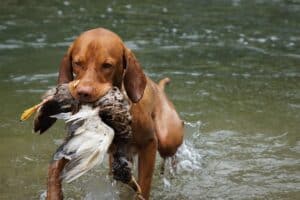 Bring your dog’s toy a few steps away from where he is sitting so that he can see it, and ask him to find it. (Here, you can use the command ‘find!’, or the name of the toy, or just ‘toy!’ etc., for any object that you hide and want him to bring to you). Once he goes to the toy, praise him immediately, even if he doesn’t touch it. Repeat this each time he is close to the toy and thus try to encourage him to take it into his mouth. The first time he takes the toy into his mouth, praise him and give him a treat, and give him back the toy and play with him for a while. (This is important. Otherwise, he will think that you always take the toy away from him, and thus he won’t want to bring it to you).

When he has learned to take the desired object into his mouth, try to make your dog bring it all the way to you. First, praise him when he comes running with his toy in his mouth, then praise him only when he brings it to your hand (you can trade the toy for a treat). When he has learned all this, you can start hiding the toy in more difficult places (in another room, behind a tree on a walk, etc.).

There are two versions of the advanced object search game, and it’s possible to teach your dog both versions if you wish. In the first version, you hide an object (toy or whatever) somewhere outside (where there are not many other objects to be found), and your dog doesn’t need to know what the object is. You tell him to ‘find!’ or look for a ‘toy!’, and he is supposed to bring you an object that he can find with some human smell. This can be really useful if you, e.g., drop your glove, car keys, etc. (Practice a lot with various objects but start with easy ones, like his favorite toys.) In the other version of the game, the dog has to know the name of the desired object and bring it to you, so you must teach him one object at a time (for example, ‘ball,’ ‘kong,’ ‘bone,’ etc.). You can play this game in your house, and the better your dog can distinguish the various objects by their names, the more you can try to confuse him by hiding some other objects.