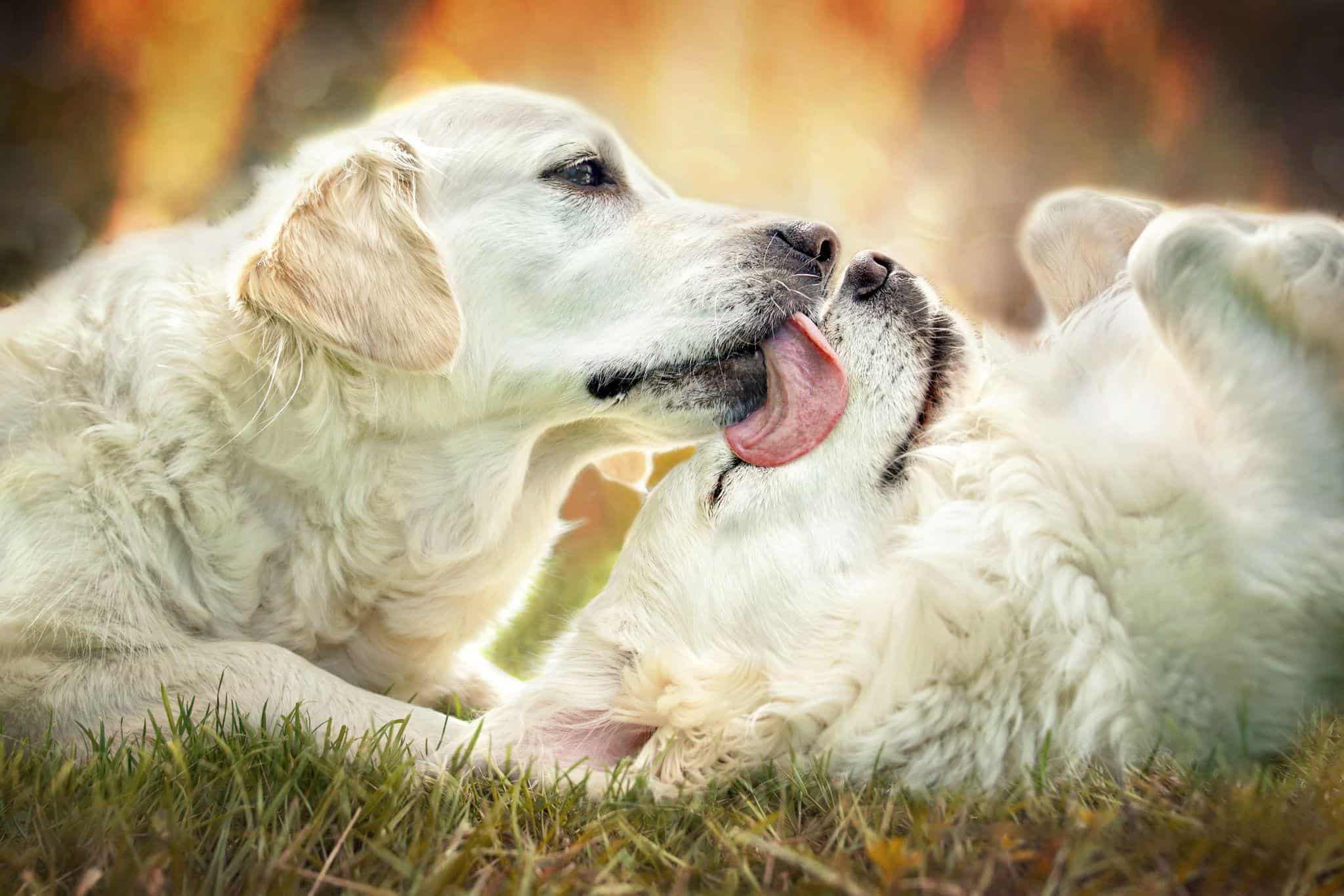 Why Do Puppies Lick?

While puppies and dogs both love to lick, puppies usually engage in this behavior for an entirely different reason than an adult dog would. A young puppy will lick their mother’s face when they want to be fed. This instinctual act goes back to their wild ancestors, who would lick their mother’s lips when she returned from a hunt. In this case, licking their mother’s lips would signal her to regurgitate some of the yummy meat she had consumed during her hunt.

While this is clearly no longer the case with domesticated puppies, licking its mother’s face still has a similar meaning. After they transition to solid food, a puppy will lick their mother dog to indicate that they want her to “take care of them,” whether by way of food or affection.

While we know why a puppy will often lick their mother’s face, why does an older dog engage in this behavior? Is this just an instinct leftover from puppyhood, or is there more to it? Let’s look at 4 reasons adult dogs lick faces of other dogs.

One common reason dogs lick other dogs faces is to show subordination. This lets the other dog know that they consider them the boss and that they mean no harm. Your dog may do this when he has met a friend he respects – especially if he licks them from under the chin! If the “respected” dog licks them back, then they have accepted their show of deference. This is another dog behavior passed down from wild dogs, as subordinate pack members will lick the faces of the more dominant pack members to show their respect and subordination.

If your dog comes into contact with a dog they already know and like, or even a dog they meet for the first time, they may lick their face as a sign that they’re ready to play! This shows that your dog is friendly and prepared to engage in some nice play, especially if a “play bow” accompanies the face licking.

While dogs lick for many reasons, one of the primary reasons a dog may lick another dog’s face is to bond and show affection. Licking each other as a form of bonding is common for many mammals, as it releases endorphins that benefit both the recipient and the dog doing the licking. As you may have guessed, this is another wild dog instinct, as non-domesticated dogs lick faces to keep closeness in their pack.

Unfortunately, not all dog licking is for a positive reason, and your dog may be licking other dogs as part of an obsessive habit. Just as dogs obsessively lick themselves, this behavior may extend to other dogs, furniture, and even their owner. Obsessive licking is often due to anxiety or dog Obsessive Compulsive Disorder (OCD) and may need to be treated by a veterinarian.

If you suspect your dog is obsessively licking another dog’s face, it’s important to positively interrupt the excessive licking and distract them with something else. Obsessive licking can damage your dog’s relationship with another furry friend, and it’s also not fair to be the subject of compulsive licking!

What to Do if Your Dog’s Licking Becomes Obsessive

If your dog cannot stop licking themselves, it may be time to book a visit with your veterinarian. It’s important to rule out any physical or mental issues that may be causing the obsessive licking. Licking can signify several physical problems in dogs, including allergies, dry skin, parasites, and pain.

Connect with a Vet Today for Free Pawp - the Online Clinic for Pets
Free Trial; Then $24/month
Talk to a Vet Now
We earn a commission if you make a purchase, at no additional cost to you.

Your dog may also be obsessively licking due to boredom. In this case, ensuring that your dog is mentally stimulated and receiving adequate exercise is key to stopping the licking behavior. While licking may seem like strange behavior for a bored dog, it’s essential to remember that licking is an activity – and your dog may find it soothing if they feel understimulated and depressed.

While licking other dogs’ feces may seem strange to us, it’s an instinctual behavior for our dogs that usually indicates something positive. If you find that your dog is obsessively licking other dogs and themselves, then scheduling an appointment with a licensed veterinarian may be helpful in determining the cause. Licking can indicate something more serious, and we owe it to our furry friends to ensure they’re living their best lives!