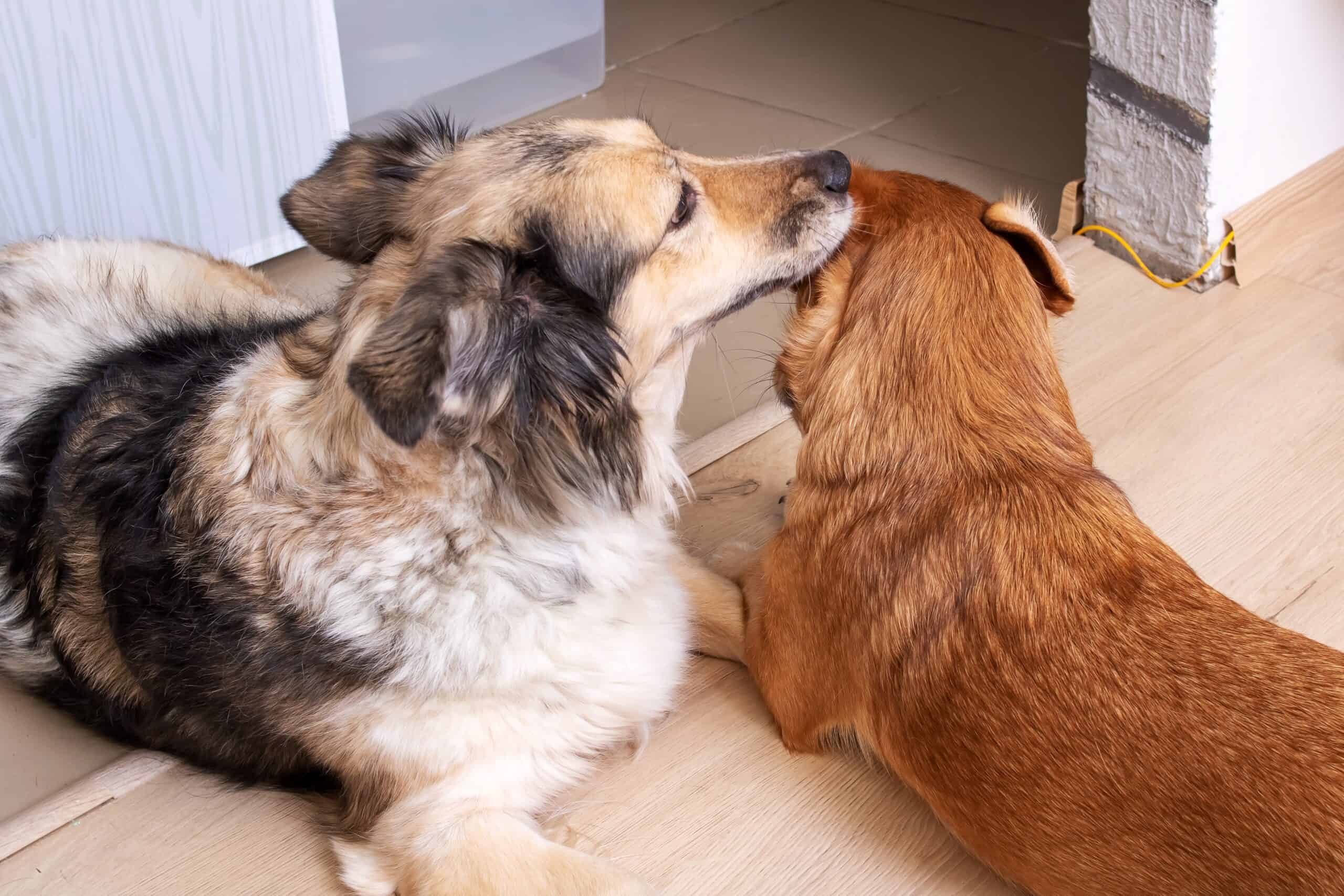 If you are a dog owner, you will often see your dog engaging in bizarre behavior – and it’s safe to say that one of the weirdest ones is when they lick other dogs’ ears. When you observe the behavior, it’s hard not to wonder, “why does my dog lick my other dog’s ears?” There are many reasons dogs sometimes lick other dogs’ ears, but luckily, most are just because dogs are social and affectionate animals.

There are many reasons your dog may feel compelled to engage in excessive ear licking, including a compulsion to show submissiveness, a desire to be affectionate, boredom, obsessive self-soothing behavior, and even because they like the taste of another dog’s ear infection. While most of the causes of dogs licking other dogs’ ears are harmless, it’s essential to investigate the issue in case any underlying problems need to be addressed.

While this answer might seem hilariously simple, some dogs have an affinity for licking ears! Earwax contains a lot of salt, so many dogs feel compelled to lick other dogs’ ears to satisfy their cravings for salt. While it’s important to rule out any potential health or behavioral issues causing ear-licking, the answer may be as simple as your dog enjoying the behavior.

Your Dog Is Grooming The Other Dog

Aside from an affinity for licking ears, one of the most common reasons you might observe one of your dogs licking your other dogs’ ears is that they might be affectionately grooming each other. While dogs sometimes lick themselves to keep their fur clean, they can’t reach any areas on or around their head. For this reason, many dogs lick each other’s faces and ears as a form of affection and bonding.

The Dog Being Licked Has An Ear Infection

One of the strangest causes of dogs licking other dogs’ ears is that the dog being licked suffers from an ear infection. As mentioned, one of the most common reasons dogs lick ears is because the ear wax has a salty flavor. When a dog has an ear infection, the taste of the earwax and discharge changes — and in many cases, dogs seem to love the new taste of the infected ears. If the behavior suddenly develops and seems almost compulsive, it’s worth checking if the dog whose ears are being licked suffers from an ear infection.

Your Dogs Are Greeting Each Other

If you notice that your dogs lick each other’s ears whenever they meet, the behavior may be a greeting! When the ancestors of dogs used to live in packs, they would sometimes lick their ears to greet each other. Specifically, weaker dogs would lick the ears of dominant dogs to show their submission. If you observe your dogs licking other dogs’ ears, it’s probably done so that the weaker dog can introduce themselves and demonstrate their submission to the other dog — and there’s no reason to be worried about this submissive behavior!

Your Dog Is Self-Soothing

Should I Stop My Dog From Licking Other Dogs’ Ears?

As we’ve established, most of the reasons that dogs lick other dogs’ ears are harmless. Some dogs lick ears as a social behavior to bond or show submission, while others just like the salty taste. And, of course, many dogs lick each other’s ears as a greeting. While most ear licking is entirely harmless, there are some situations where you do need to stop your dog from licking other dogs’ ears.

Luckily, discouraging your dog from licking other dogs’ ears is achievable if you approach the issue with the right methods and commitment. Before addressing the problem, you’ll want to ensure that there aren’t any underlying compulsive behaviors or ear infections causing the issue. Once you’ve confirmed that there are no external causes for the behavior, you can redirect your dog from licking using tempting and stimulating toys and treats. Ideally, you should also teach your dog a command like “stop” so that you can effectively and quickly communicate that the behavior isn’t okay.

While ear licking is entirely normal behavior, there are plenty of situations where the behavior can become concerning — and in some instances, it can even be dangerous. Informing yourself about the signs of obsessive licking behavior and being prepared to address it will save you from significant stress and veterinary expenses. Plus, it will ensure your dog is much happier and healthier in the long run!

Last Updated on November 22, 2022 by acmecanine