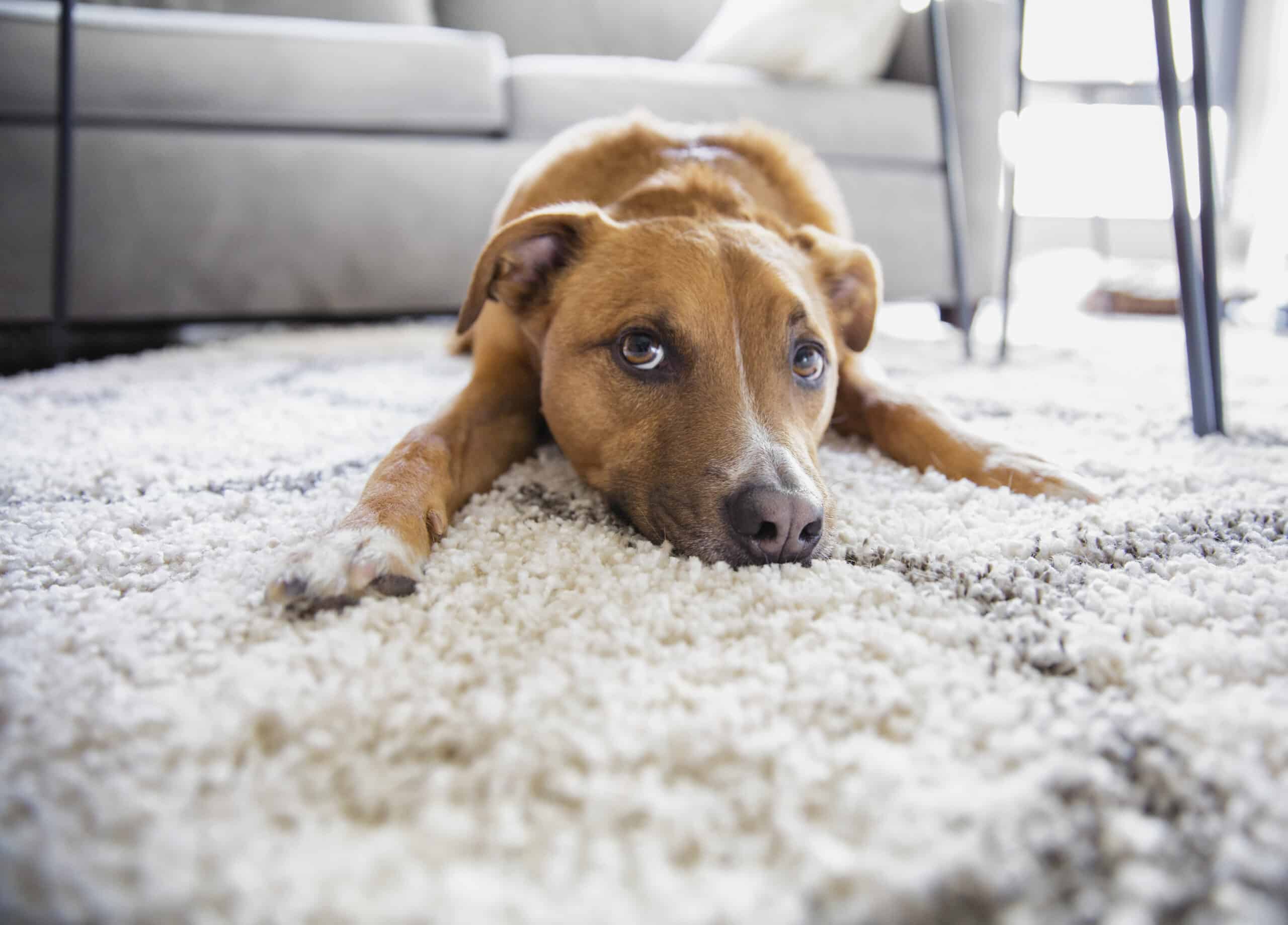 As a dog owner, there’s nothing worse than coming home from work to find out that your dog has torn up your carpet. Dogs scratching up a carpet is normal behavior, but it sure can be frustrating to deal with as a pet owner. So how can you curb this destructive behavior?

There are a few ways to stop your dog from scratching your carpet. However, the solution to the problem is inherently dependent on the reason itself. We recommend you figure out what’s making your dog engage in this behavior. Once you figure that out, you can start thinking about how to train it out of them. Let’s look at some of the most common reasons for this unwanted scratching behavior.

Why Does My Dog Scratch the Carpet?

Generally speaking, there are a few reasons your dog might be scratching your carpet. The first and most common reason dogs scratch carpets is boredom. If your dog is left to its own devices for hours at a time with nothing to do, it might start scratching the carpet out of sheer boredom. When a bored dog doesn’t have anything else to occupy their time, such as chewing on a toy or bone, they might turn to the next object that offers a bit of sensory stimulation – your rug or carpet!

Like humans, dogs can also suffer from anxiety. Whether it’s caused by the presence of new people in the home, a change in environment, loud noises like fireworks or gunshots, or being separated from their owners, anxiety can trigger the burrowing behavior of scratching the floor or carpet. This instinctive behavior is common in dogs as it relates to their primal ancestors digging away from danger or burrowing themselves into a safe space. Separation anxiety can also stimulate this behavior because dogs often want to keep themselves safe when physically separated from their owner.

A dog that hasn’t been appropriately trained will attempt to dig into your flooring or carpet to assert dominance, garner attention, or mark its territory. If this behavior goes unaddressed for some time, it can be tough to curb later in life. If your dog has been exhibiting this behavior for some time, you must take care of it ASAP.

How to Stop Your Dog from Scratching the Carpet

The best way to deal with your dog’s pent-up energy or boredom is to keep them as busy as possible. This means providing them with plenty of exercise and toys to play with when at home.

How much exercise your dog needs depends largely on their breed, but dogs need at least an hour of exercise daily. How intense this exercise needs to be is also dependent on the breed – pugs shouldn’t be running full tilt for any length of time, after all – but if you’re not able to exercise your dog enough every day, then you’re going to be dealing with quite a bit of carpet scratching.

Intellectual stimulation is another way to keep your dog engaged and stop them from scratching the carpet. While physical exercise is a must for any dog, intellectual stimulation is a different kind of play that can be utilized to adjust your dog’s behavior. An example is hiding treats around a space and having them sniff out the hiding spots. Learning tricks is another great intellectual training mechanism that forces your dog to think! You must attempt to exhaust your dog’s storage of mental energy, as while they might be physically tired, they could still have their minds running – this might keep them scratching the floor.

Distract Them Once the Scratching Begins

When you notice your dog start to scratch the floor, distract them and put their mind onto something else. Immediately addressing the behavior when it begins is an important step in curbing it. Never let it go on for too long, as it will make them think it’s acceptable and get them in the mindset that it’s okay to do.

Distracting them early is imperative to curb the behavior because once they get older, they might be confused when you address it. This is because you’ve let it go on for so long. Catching it early won’t let it become an established habit or behavior.

This step is a little trickier and may require professional help identifying anxiety sources. However, some sources are easy to address. For example, if your dog yelps or whines whenever fireworks are set off, it’s probably safe to assume that they don’t like them very much. You can address this anxiety source by utilizing an anxiety vest, training them with treats while using gentle exposure therapy, or placing them in a soundproof environment when you know fireworks are going to occur.

What Not to Do

It’s not recommended you take any drastic steps to stop your dog from scratching the carpet. One such method you might consider is declawing them. However, this is considered by most animal experts to be quite cruel for a dog to deal with. Not only is it very painful for your dog, but it can make it more difficult for them to run and walk effectively. Your dog’s claws give them much more traction when moving about. Take away their claws, and they won’t be able to run around as effectively.

Your dog might be scratching your carpet or flooring for several reasons, including their breed  (the Yorkshire Terrier and Cocker Spaniel are well-known for scratching and digging behavior). However, it’s important to remember that no matter how frustrating a behavior is, your dog has no clue how much it’s bugging you until you clearly communicate it to them.

Always be calm and patient when training any animal, as displaying anger or frustration won’t help you when trying to curb behaviors that you find obnoxious. Best of luck in your dog training endeavors!