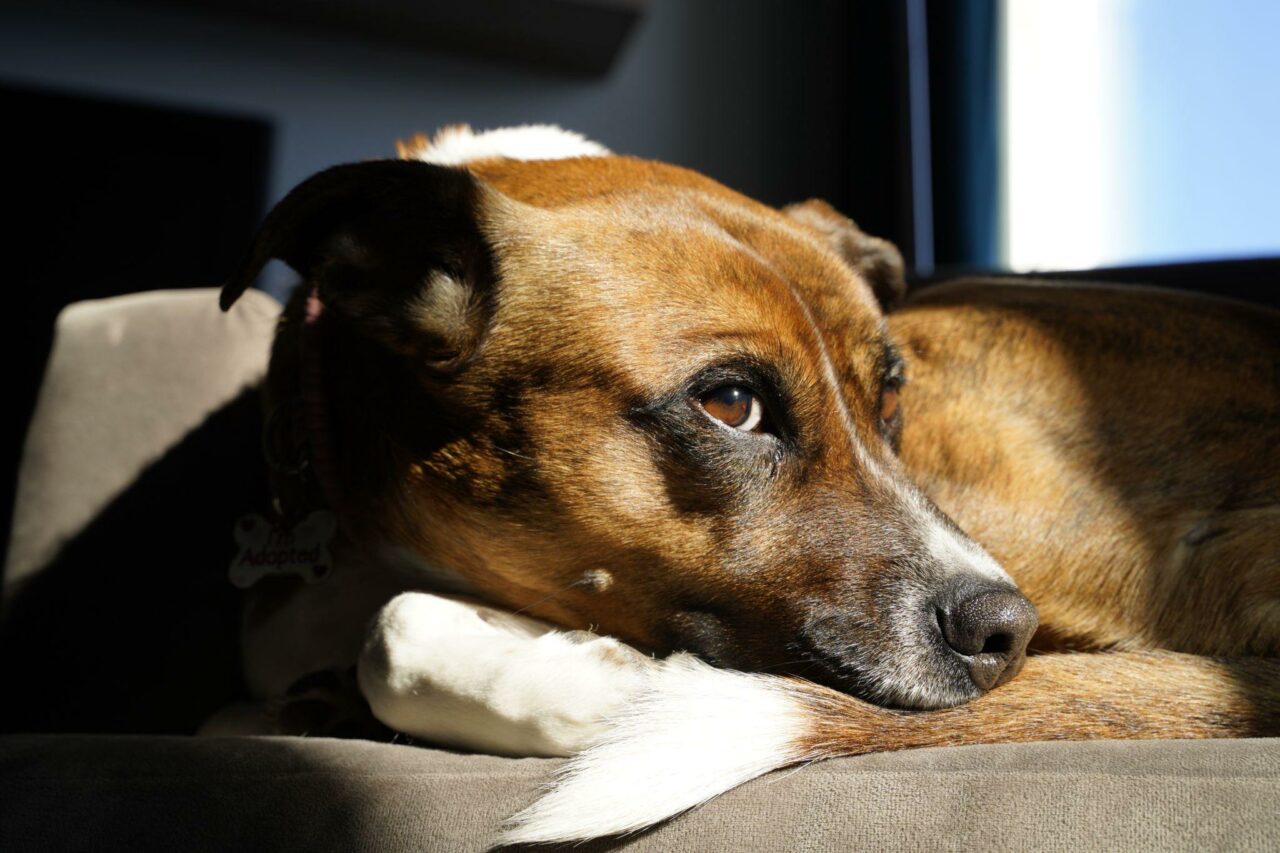 Disclosure: Acme Canine is Reader Supported. If you buy something thru an affiliate link on our site, we’ll received a commission at no additional cost to you.

When your dog starts whining at night, you probably just think they want something, like being let outside. When that doesn’t help, you may become concerned that something’s wrong. This concern can quickly be overshadowed by annoyance for a dog owner, though, if your pet keeps doing this night after night.

There are several reasons why your dog could be whining at night. Some of them are cause for concern. Others, not so much.

You and Your Dog Are on Different Schedules

Just because you are awake during the day and asleep at night doesn’t mean your dog is on the same schedule. Some dogs are more likely to sleep when you’re away at work because there’s nothing for them to do then.

When you finally come home, they naturally wake up and want to play with their friend. So, when you go to sleep in the middle of their awake time, they want to wake you up so you can pay attention to them. And to do that, they whine in an annoying way.

Spending more time with your dog during the day can help. Letting them sleep in your bed at night can help, too.

Your Dog Is Suffering from Anxiety

Dogs can suffer from anxiety, too, that’s not just a people thing. If your dog is suddenly whining at night, ask yourself if there have been any changes at home recently. Have you started working on a different schedule? Did someone new move in? Did someone move out? Did you change brands of dog food?

You may see such changes as no big deal, but your canine companion has a different perspective. Their world is much smaller and simpler than yours, and changes like these are a major disruption. Your dog could take such changes as a sign that there’s something seriously wrong with the world. And that could make your dog feel anxious enough to have anxiety attacks. Whining can result.

There doesn’t have to have been a change at home to set off anxiety problems, though. Just like people, some dogs suffer from anxiety disorders. They are prone to being worried and anxious and, at night, they may need reassurance.

Here are some common signs of anxiety in dogs:

If your dog’s anxiety results from a recent change at home, they’ll probably get used to it in time, and the whining will stop. Try to be reassuring and attentive to your dog during the day. If the whining persists and you notice any of the above signs, tell your vet about it.

Your Dog Has Dementia

Anxiety can also be the result of dementia. Unfortunately, dementia is another condition that older dogs suffer from just as much as people do. If your dog is getting on in years, they could potentially have dementia. It can be harder to tell with dogs, though, because dogs can’t talk.

Dementia is very confusing. If your dog doesn’t recognize you or your home, they can feel anxious and even have anxiety attacks. Whining can be a symptom of this.

Only your vet can diagnose dementia in your dog. If you have an older dog that is whining a lot, and you can’t find a reason for it, it’s a good idea to schedule an appointment and talk to the vet about this canine cognitive dysfunction.

Your Dog is Hurt or Uncomfortable

Whining or dog whimpering can also be a sign of discomfort or even pain. If your dog starts whining at night, observe them during the day. Look for limping, difficulty sitting or squatting, or other signs that your dog is hurt in some way. Look over their body for signs of injury. If you find anything, it’s time to call the vet.

If your senior dog is whining, it can also be a sign of arthritis or other joint problems. These can make your older dog uncomfortable, even while lying on a comfortable doggie bed. There might not be any position that your dog can find that doesn’t cause pain. If your dog is getting old and is whining, mention their age to your vet, so they can look into arthritis as a cause.

Your Dog Is Sick

Illness is a common reason for chronic whining or crying. Nausea, sore throat, and headaches can all cause enough distress to make your dog need to express it. Frequently, the medical condition isn’t very serious. It will likely pass on its own in a few days or a week. Sometimes, it is something more serious, though. And, as you are not a veterinarian, you can’t tell the difference between the two in a whining dog. So you’d better call a real one.

If your dog is whining a lot, look for other signs of illness. Loss of appetite, nasal discharge, sneezing, coughing, a swollen belly, fever, and congestion are all signs that you should call the vet about your whining dog.

Your Dog Is Having Nightmares

If your dog is whining in their sleep, nightmares are probably the reason. It’s a bad idea to try to wake them up, though. Suddenly being jerked awake from a nightmare can be disorienting, making your dog panic and bite you. The number one reason why children are bitten by dogs is that the kids woke up the dog.

Your Dog Isn’t Getting Enough Exercise

If your dog isn’t getting enough exercise, it may feel too wound up and energetic to sleep well at night, which can lead to whining and other disruptive behavior as they get bored and frustrated. Try letting your dog get more exercise and see if that helps with the whining.

Whining at night can be difficult to diagnose. But if you keep at it, and pay attention, you should eventually figure out what your canine friend is trying to tell you with this unwanted behavior.